One of our aims on this trip was to find and document as many flowering plants as we could. David is, after all, a horticulturist with “sap in his veins” and I’m enamoured of plants and flowers; what more motivation did we need! 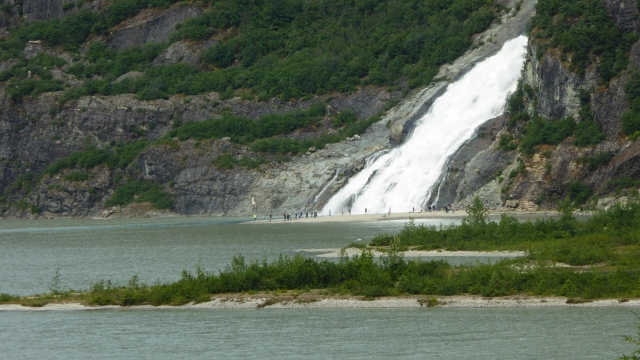 So, now, let’s go plant hunting with David as he wanders towards Nugget Falls in the stunningly beautiful environment of Mendenhall Glacier. There’s not a lot of time for this exploration… time constraint is always a problem in the life of a plant hunter… but with David’s keen eye to find plants endemic to the area, there’s plenty to see and enjoy.

Plant names and notes are given to the best of our knowledge. Should you think otherwise, please let us know in the comment section below. I’ve also researched each plant that David photographed and have found interesting facts about each one to share with you.

One fascinating part of plant hunting is to look out for the “succession factor”; in this case the way different plants take their turn in colonising the moraines left bare by a retreating glacier. We look down at a green swathe now, but that has taken maybe a hundred or more years to become established to this point in its evolution. I’ve added David’s photos in a way that will, hopefully, explain how the plant colonisation has happened here in Mendenhall. 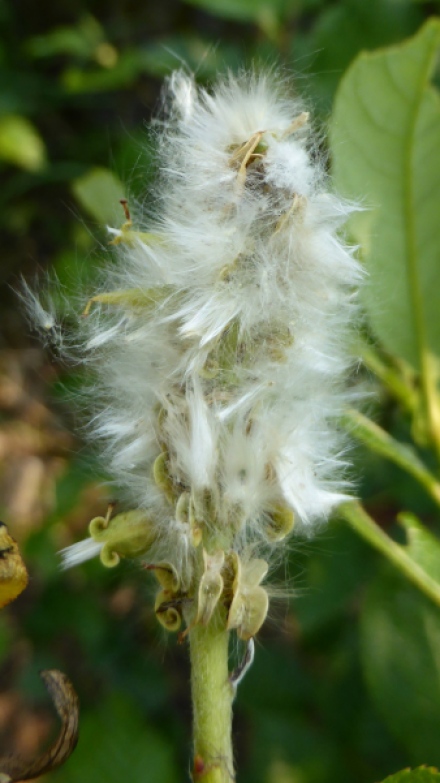 The first pioneer plants here are usually the ones whose seeds arrive on the wind, like the spores of mosses; plants that help to bind the rubble into mats onto which other seeds can find a place to grow. Like moss spores, the fluffy seeds of willows such as Salix sitchensis, or Sitka Willow, are so light, they travel on the breeze for some distance, even many kilometres. However, the tiny Salix seed has to find a suitable place to germinate very quickly because it only retains viability for about 24 hours. Undoubtedly, many of the abundant seeds produced by a Salix plant will fall on inhospitable surfaces and die. Those that live are true pioneers.

These willows can survive harsh environments without much nutrient. They reproduce quickly and abundantly but, as early colonisers, they are often stunted in growth and short lived. On their death, their decaying matter provides some nutrients for the next group of colonising plants which naturalists sometimes call “the homesteaders”.

These are the developing cones of Alnus crispa sp.sinuata, known as Sitka Alder, one of the dominant “homesteaders”. They are the first plants to really thrive in recently deglaciated terrain in Alaska and are important because their leaf litter adds nitrogen to the soil (in much the same way as clovers and legumes). With that enrichment of the soil, plants such as willows and cottonwoods have a much better chance of thriving.

Mature cones of Sitka Alder, Alnus crispa ssp. sinuata may hang on the trees for long after their seeds are dispersed. Such cones are sometimes electroplated with gold and sold in the gift shops as jewellery. (They might have made the perfect souveneir for our Christmas tree but we didn’t see any for sale and in any case we can’t bring wood products into Australia.)

The Alders play host to this unusual plant, Boschniakia rossica, commonly called Northern Groundcone, which looks very much like a bunch of pine cones stuck in the ground. It grows in the dense shade under Alder thickets where not much else can grow. It needs no light as it produces no chlorophyl. It is, in fact, a parasitic herb which lives on the roots of the Alder. What look like cone scales are really brownish, two lipped flowers. Grizzly bears like to feast on these thick fleshy plants… but none were around on this day, fortunately!

The plant is named after a Russian botanist, A.K. Boschniak. That’s not surprising since the Russians had a base in nearby Sitka from 1799 until 1867… the latter being the year that Alaska was purchased from Russia by the USA.

A plant that is also important in the plant colonisation process here in Alaska is Lupinus nootkatensis, the delightful Alaskan Lupin, or Nootka Lupin, seen growing here in a bed of moss.  Lupins also add much needed nitrogen to the soil, enriching the environment for other plants to survive and thrive. Grizzly bears like to feast on the Lupin roots.

Lupinus nootkatensis is one of the Lupin species from which garden hybrids are derived. It was introduced into Europe in the 18th Century and now grows like a weed in northern Europe, festooning banks with colour in summer. In Iceland, it was introduced to try to stabilise soil, but, it has done so well there, that it’s now endangering native Icelandic plants.

Another plant commonly found with the Alders are Wintergreens. This one, Pyrola asarifolia, or Pink Wintergreen, is the largest of the Wintergreens in the Alaskan coastal forests. There may be 8 to 25  delightful bell or cup shaped flowers along a tall stem. These flowers seem to hang their heads demurely. Perhaps they are not sure what we might think of their secret! For these delicate flowers belong to a plant that is scientifically known as a semisaprophytic plant; it can make its own chlorophyl (hence the semi) but it lives mainly on dead plant and animal material. Saprophytic plants like these require the assistance of fungi to help breakdown the organic material. It’s a delightful but unusual plant!

Pyrola has been used in native medicine as a poultice for sores or swellings.

Another plant used by the native peoples for medicinal purposes is the low growing Lycopodium selago, commonly called Fir Clubmoss or Mountain Clubmoss. It was used as a purgative, a “strong medicine”. It’s also reported to contain a chemical that may be effective against Alzeimer’s Disease. It seems that we still have so much to learn from plants!

Another interesting fact about club mosses is that their spore powder, known as “vegetable sulphur”, is very flammable and has been used to make fireworks and was even used in early flash photography.

The Club moss above is growing in amongst some other mosses. In general, however, many of the mosses and lichens don’t do very well in the leaf litter in the deep shade of Alders. They prefer to grow on the branches as epiphytes where they find some light.

The next stage in the colonisation process is the growth of conifers, especially Spruce and Hemlock. In this photo, Alders are in the lower right corner, while conifers have displaced them on the lakeside bank.  Young conifers may take 100 to 400 years before the Spruce and Hemlock forest, which is endemic to this area, becomes fully established.

Our time at Mendenhall was flying but we still just had time to visit the excellent “Discovery Centre”and take in the documentary made about this glacial area. The interpretative section of the centre was also very well done; I could have spent hours there. However, our time was almost up; the bus awaited our return.

As we walked back down towards the bus, the bank beside the footpath provided us with yet another opportunity to photograph flowers!

This lovely plant is Aruncus dioicus (common name bride’s feathers).  It was growing on a moss covered bank of rocks which made a delightful back drop to my photo. It’s a hardy plant; there wasn’t much soil on this steep rocky bank.

A Holodiscus discolor (Oceanspray) was growing on recently disturbed soil amongst a delightful swathe of Creeping Buttercup, Ranunculus repens. Note the reddish stems of the Oceanspray.  Another common name for this plant is ‘ironwood’, because of the hardness of those woody stems. Native peoples made these stems even harder by heating them over a fire before using them to make digging sticks, small spears, harpoon shafts, and arrows. Some native groups even used the stems for salmon barbequing sticks.They have also been made into knitting needles. Before the advent of nails, pegs made from the stems were used in construction projects.

As a medicine, some groups made an infusion of the brownish fruiting clusters to help stop diarrhoea. The infusion was also used as a blood tonic and to counteract measles and chickenpox.  Indeed, a particularly useful plant.

On the same bank David found this very common roadside plant, a member of the Evening Primrose family, Chamerion angustifolium, formerly known as Epilobium angustifolium. It is known by the names of Tall Fireweed, Great Willowherb or Rosebay Willowherb. Is it any wonder we need the Latin names for plants; so many common names for one plant.

Unlike other types of Fireweed, this one has unbranched erect stems. The buds grow on tall red stemmed spikes. They burst into flower from the lowest buds first. Again, this plant looks delightful against a background of golden moss.

Locals in Alaska make a syrup from Fireweed and they also enjoy Fireweed honey. What they also know is that when Fireweed stops flowering, winter is upon them!

It always amazes to me that, almost anywhere you go in this world, at least one member of the daisy family, Asteraceae, will find a place to make it’s sunny presence felt. This is not a planted garden; it’s a natural bank of plants. They are always a welcome sight to me.

And just before I climbed on board the bus after a most enjoyable afternoon, I stopped to admire a bank of white daisies; how appropriate near a glacier!

And, of course, I couldn’t resist a closer look! Simple, very common and yet…

Our plant hunting in Mendenhall might be over but there is plenty more to come!

It’s now time to get ready to board our home for the next week,

“I go to nature to be soothed and healed

and to have my senses put into tune once more.“

More of our travel posts can be found on