Back in Juneau after an absorbing afternoon at Mendenhall Glacier, we waited in keen anticipation for our call to board the small ship “Sea Lion” for our Lindblad / National Geographic expedition. 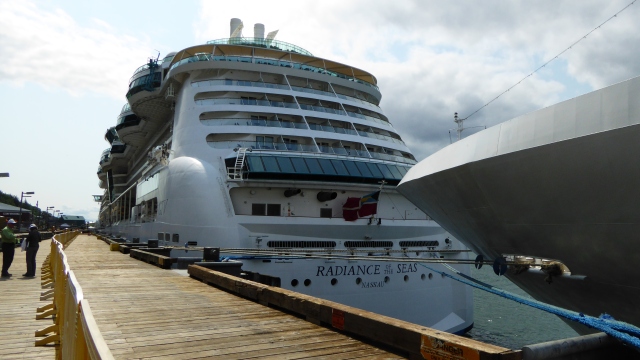 This was certainly not our ship. It was one of four huge cruisers, monoliths of the sea. that were moored at the docks. Obviously many choose to cruise this way, but it’s not our choice.

However, if we had chosen to do so we would have had the advantage of 10+ dining venues, plus 16 more cafes, bars and lounges; 3 pools and 3 whirlpools; rock climbing; basket ball; mini golf; a jogging track; broadway style theatre; a casino and shopping, to mention a few items to entice one to cruise this way. And I forgot to mention the 220ft outdoor movie screen that shows first run movies night and day. There wouldn’t even be a television on our ship ! 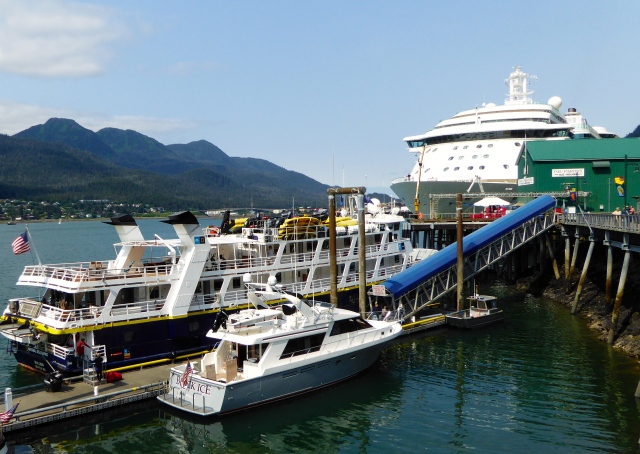 Our ship “Sea Lion”, was tucked away in front of “Radiance of the Seas”. It’s gangway went up; ours went down. It had 13 decks; we had three. It carried 3,000 passengers with a crew of 850+; Sea Lion takes just 62 passengers with a crew of 43 on an expedition, a voyage of discovery. On top of our ship were inflatable DIBs (Zodiacs) and kayaks which the nine naturalists in our crew would use to help us to experience the wilderness. 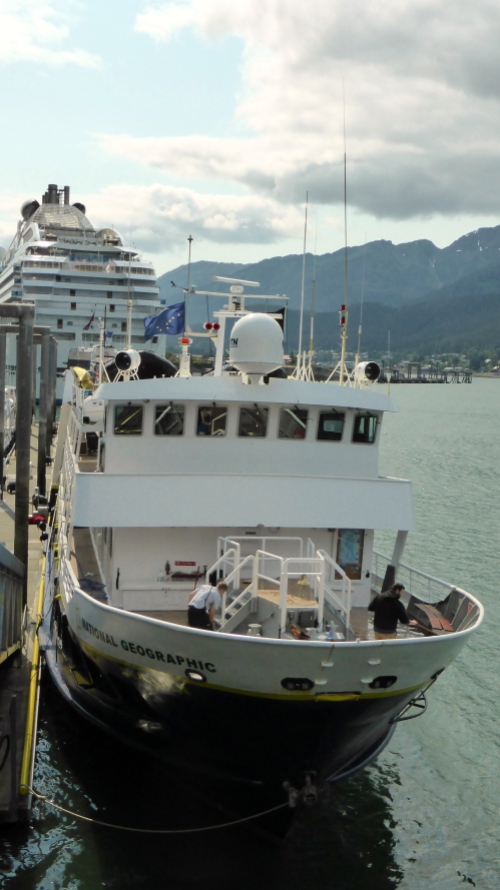 So this was to be our home for a week. Our basic but comfortable room was on the top deck. I planned to spend many a quiet hour, not far from our room, on the walkway just in front of the bridge. It would be a great place to enjoy the beauty of the wilderness as we cruised in tiny bays and by sheltered islands. But for now, having found our ship, we left the crew to clean and prepare for our arrival while we explored the Juneau docks area a little more.

Each day, the port authority puts up a list of ships and their arrival and departure times. It seems that we were but two of 10,150 people visiting Juneau by ship that day!  So we decided to shun the busy souveneir street and explore more of the boardwalk.

A great little ship (or was it a boat?) was moored close to “Sea Lion”. Both David and I agreed that we could happily explore here aboard this ship /boat /yacht. We did ask later what the difference is and were told that a ship can carry a boat or boats but a boat can’t carry other boats!  A yacht is a yacht! It has sail power. A submarine, in nautical terms, is a boat! Hmm! Having got that sorted, let’s move on, shall we?

Along the boardwalk, near the fishermen’s cooperative, we found this great manhole cover. It reminded us that cruise ships and tourism are not the only source of income along this dock area of Juneau. Fishing is also important and obviously King Crab is one of the delicacies caught here. I wondered if it would be on the menu on the ship! 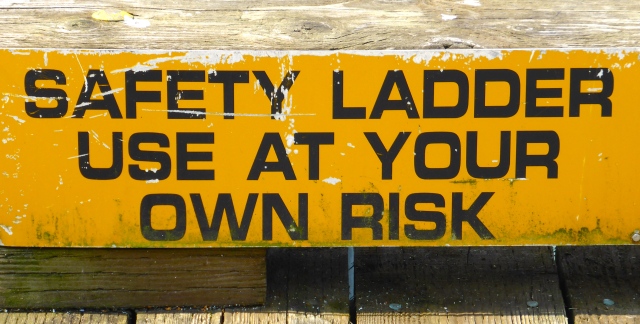 And a little further along we found this sign!

There’s a statue of a dog on the boardwalk in Juneau, a dog called Patsy Ann, a dog that lived a life which captured the hearts of the people of the town. During the 1930’s, no ship, or boat, entered this port and tied up at the dock without being welcomed by this white bull terrier. Although loved and kindly treated by her owners, she was not a homebody and became something of an identity around the town. When not visiting shops and offices in the town, and enjoying the inevitable treats that came her way, Patsy Ann chose to live with the men at Longshoremen’s Hall, down close to the docks.

In those days, steam ships did not arrive in port at a due time, like clockwork, as they do today. No one really knew when a ship or boat was approaching the docks. But Patsy Ann knew! Even though she was partially deaf from birth, she would know. And the people of Juneau learned that, when Patsy Ann dropped whatever she was doing and trotted off down to the docks, a ship was coming into port. Patsy Ann would then, unerringly, settled down at the dock where, she knew, the ship would tie up.

Having ‘left home’, Patsy Ann looked to be in a spot of bother when dog licensing laws came into effect in Juneau in 1934. The people of Juneau chipped in and bought her license, her tag and a bright red collar. It wasn’t too long before that collar disappeared and Patsy Ann went on with her life, as before, unencumbered by either home or mandatory collar. The city then donated her annual license fee. And, when Patsy Ann died in 1942, the people came to lower her, in a coffin, into the waters of the Gastineau Channel beside the docks that she loved so much.

Fifty years later, a group of residents raised the money for the statue. A special celebration was given by the Princess Cruise line, a blessing was given by an Alaskan native spiritual leader, and once more, Patsy Ann became the official greeter of ships docking in Juneau.

The Friends of Patsy Ann Fund continues. It now supports the Patsy Ann Education and Scholarship Fund which is dedicated to the achievement of new levels of understanding, respect, kindness and compassion. And don’t we need good doses of that in the world today!

Passersby are asked to greet Patsy Ann and, in leaving her, ‘to carry the blessings of friendship throughout life’s journey’. What a good story!

The poles under these shops might well have been here in Patsy Ann’s time!

We had one last item on our ‘to do’ list before we embarked on the ‘Sea Lion’; a final visit to the Heritage Coffee Cafe to enjoy what might well be our last good coffee for some time. David looks happy. The coffee was good.

Then it was “all aboard”, and time to meet the crew, stow our luggage, do the drill in our very fetching May Wests (and hope they would never have to be used), enjoy our first dinner with this happy bunch of fellow travellers and then go out on deck and watch the world go by!

And that’s where we were, on our deck, when “Radiance of the Sea” left port and sailed off to yet another Alaskan town. We waved up at them; they waved down at us and we each decided that we were on the best ship! After all, why would anyone want to go on such a small ship? But we knew we were preparing for a very different experience… and we were content. 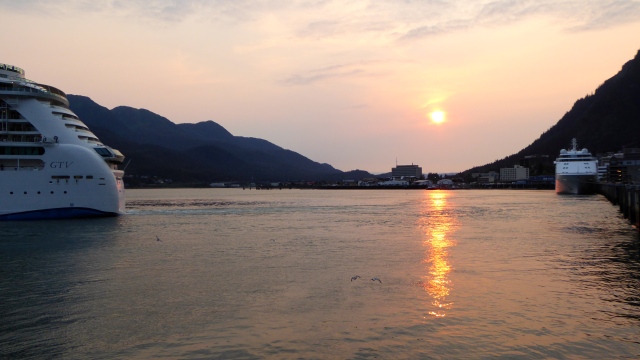 Now, we could actually see the sun sending its golden rays across the water as it sank lower in the sky. The other big ships departed… and all was quiet. We were left to anticipate the adventure ahead. Life was indeed good! 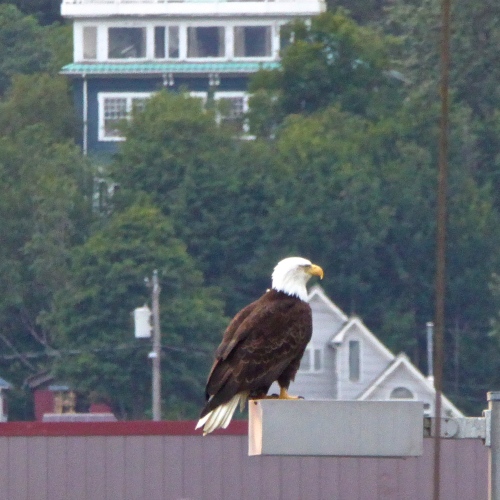 Later, a bald eagle flew down, probably in the hope of picking up the scraps left by visitors, for town dwelling eagles have now become scavengers. We looked forward to seeing many more eagles, fishing for their supper, in the wild. 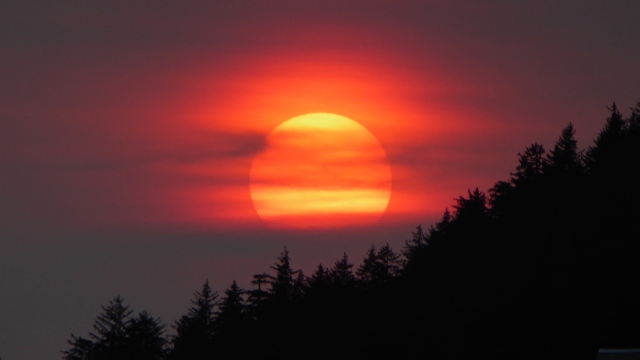 Finally the sun set on what had been a wonderful first day in Alaska.

What would the morrow bring?

Thought for today (Thanks to Patsy Ann)

‘Let us know and understand the power of respect, kindness and compassion.’

More of our other travel tales on

More of our travel photos on