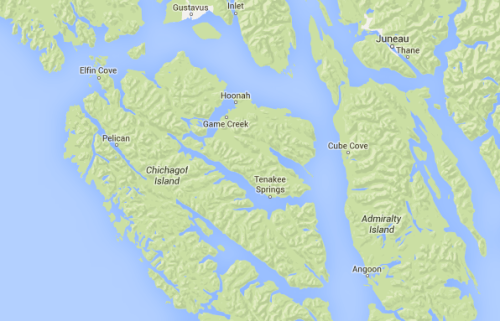 Overnight we sailed from Sitkoh Bay near Angoon (lower right of map) to George Island near Elfin Cove (top left of map). As you can see we were still not far from Juneau (top right)… our starting point! But we had explored and experienced so much that is never seen from the large cruise ships. Elfin Cove is at the entrance to the Inside Passage, so here we were not far from the Pacific Ocean, though sheltered by George Island. 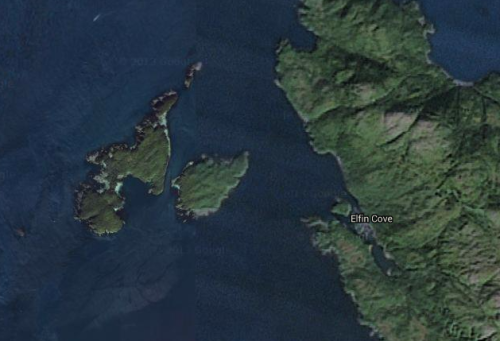 We dropped anchor in the horseshoe shaped bay of George Island, sheltered from the ocean and only 4 km from the small fishing village of Elfin Cove.  Our morning activities centred on the rocky islands. The kayakers were to circumnavigate the smaller island while the walkers would explore the beach area and then climb up to a WWII gun site on the ocean side cliffs. 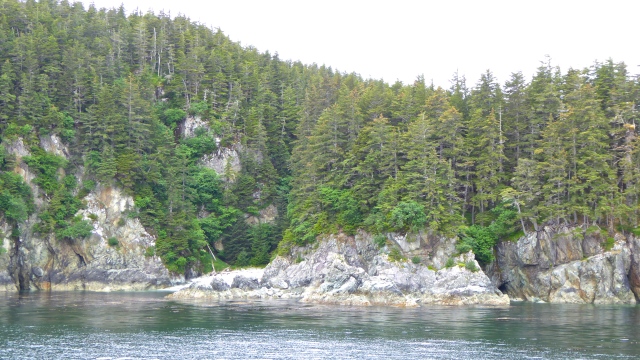 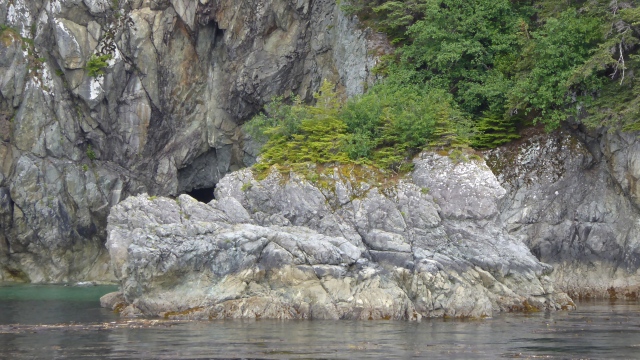 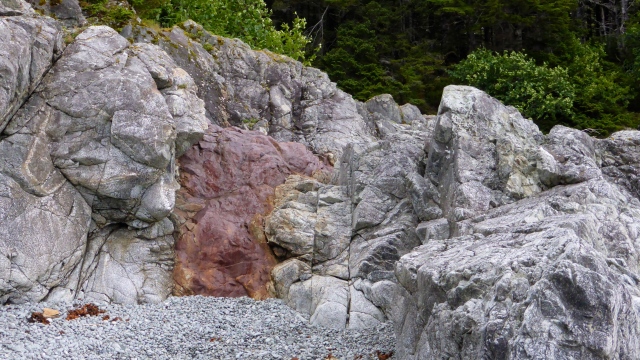 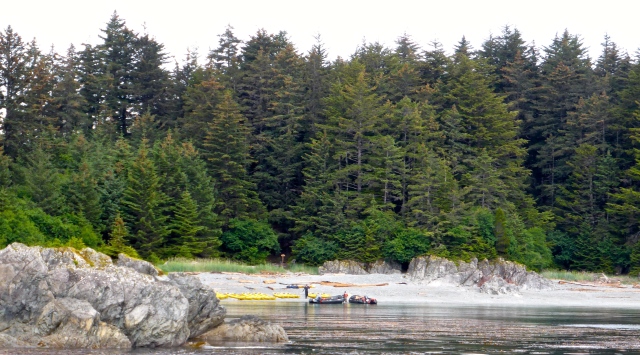 This small, sheltered beach was the starting point for our activities. 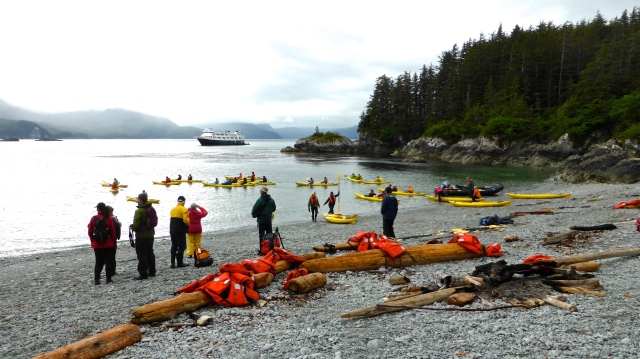 There was much excitement as the kayakers prepared to 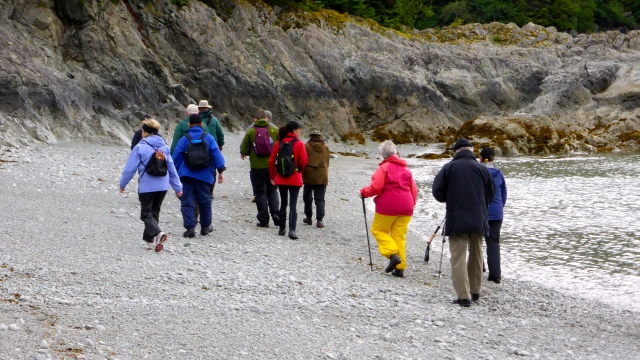 The first section of the walk was across a very stony beach. 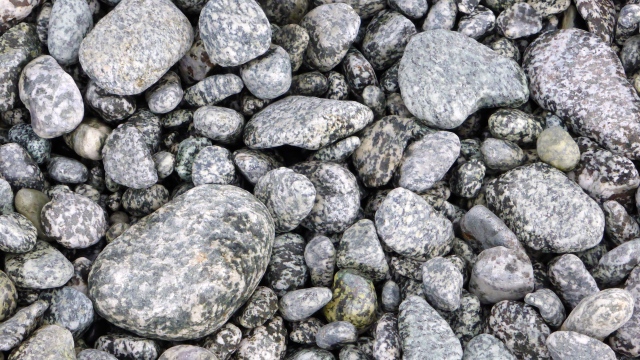 Walking on stones such as these is definitely not like walking on sand! 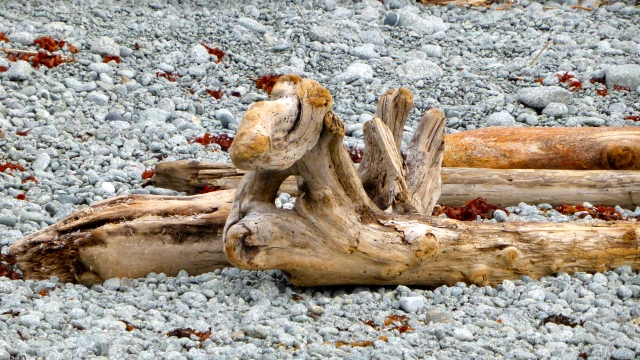 There’s always something of interest on a beach, isn’t there? 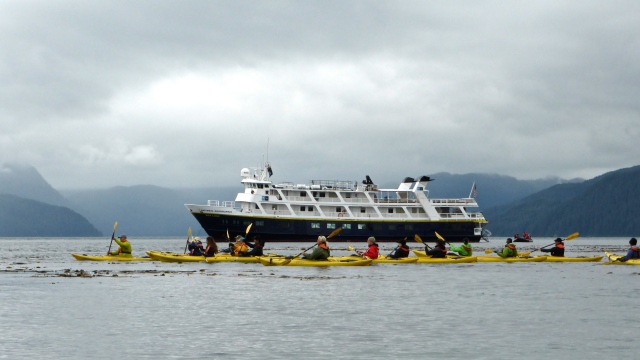 Rain threatened as the kayakers began their paddling.

While watching the kayakers, the walkers explored some beach side rock pools. 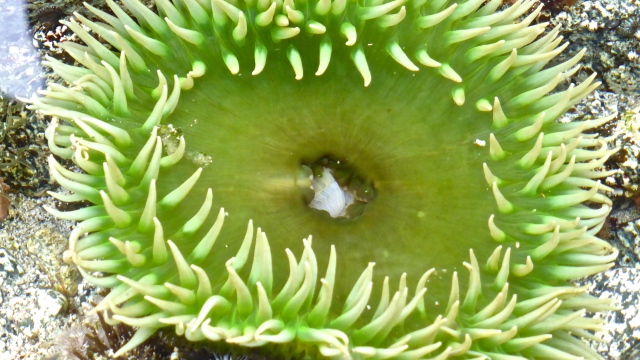 Anthopleura xanthogrammica immediately caught the eye. These giant anemones are bright green when submerged in water, as in this rock pool.  But when not submerged, they appear dark green or brown because they close up covering the bright green tentacles and oral disc. However, they prefer sandy or rocky shorelines where water remains for most of the day.

These anemones tend to be solitary although occasionally they can be found in small groups. Once settled in a spot, they usually stay there even though they can move slowly. They have stinging cells on their tentacles which are used both as protection from predators and also for catching prey such as detached mussels, and there are plenty of mussels on these shores. They also feed on sea urchins, small fish, and crabs. 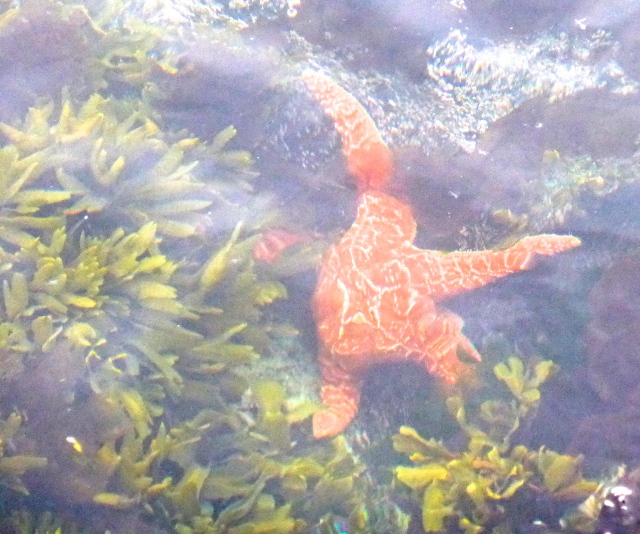 Fucus distachus is a brown alga that grows in olive-green to golden clumps in rock pools or in intertidal zones.  It holds fast to its base rock with what is called a basal discoid holdfast. The fronds, which can grow up to 30 cm, are flattened, not rounded, and have a prominent mid rib that extends the full length of the frond. When submerged, the plant is stiff and upright.

Pisaster Starfish have a spiny or warty skin that is supported by tiny bone-like plates. Numerous protruding spines on the skin keep most predators away. The most commonly encountered tide pool starfish in Alaska include both the purple and orange Pisaster.

In a groove underneath each starfish leg are paired rows of small tube feet which are used for both feeding and movement.  The maximum speed of most starfish is something like 3 cm per hour.  They pull themselves along by extending and withdrawing small suction cups on their feet. These suction caps have a powerful vacuum effect that’s also used to grip their prey and hold it fast. A starfish can break open a mollusc’s shell. It then extrudes its stomach out through its central mouth and digests its dinner. Not a pretty thought but that’s how it survives. They also feed on dead organisms and help keep the sea bed clean.

Starfish are predators and are not welcomed by fishermen when they get into nets or crab pots; they and the fishermen have conflicting interests! 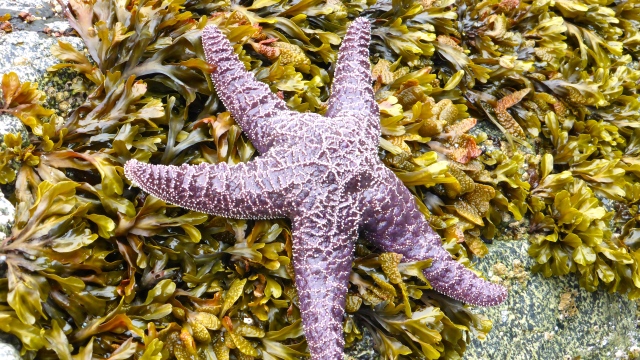 Starfish Piaster with Fucus distachus on a rock © DY of jtdytravels; P1110251

The Rockweed, Fucus distachus, although erect in water, can’t stay upright when out of the water, falling flat against the rocks until they are covered by water once more. Their fronds form a dense covering on these intertidal rocks, providing damp, sheltered spaces where small invertebrates like crabs and sea slugs can safely wait for a change in the tide.

Pisaster starfish have five or more legs and they have the amazing ability to regenerate lost arms or body parts. Sometimes fishermen, angry at finding starfish in their nets or crab pots, cut them in half, thinking that the starfish will die. But no! They regenerate and often there are twice as many starfish the next year! That’s not the fishermen’s desired result!

Each starfish arm has a pair of sexual organs; one for each sex.  In the early days of spring, pores in the arm release either eggs or sperm into the water. Once a fertilised egg hatches, it goes through several larval stages until, eventually, it becomes a tiny replica of its parents. 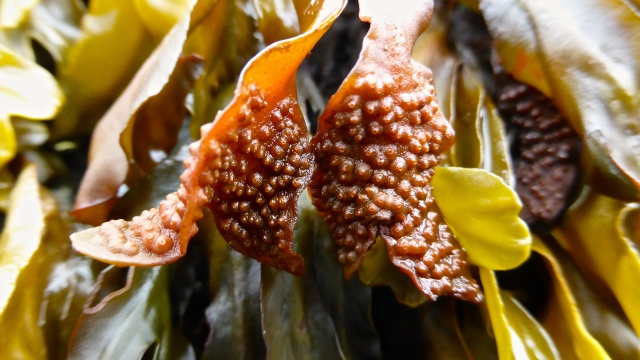 The fronds of this Fucus distachus are in their reproductive phase, swollen and bumpy. This is a slow growing Rockweed which lives for 2 to 5 years and becomes mature at 2 years. 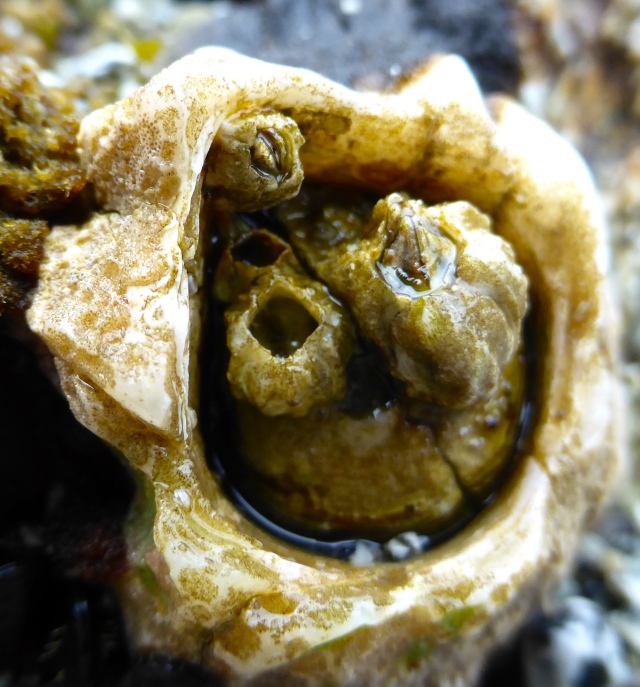 The rock pools and intertidal zones are littered with barnacles. 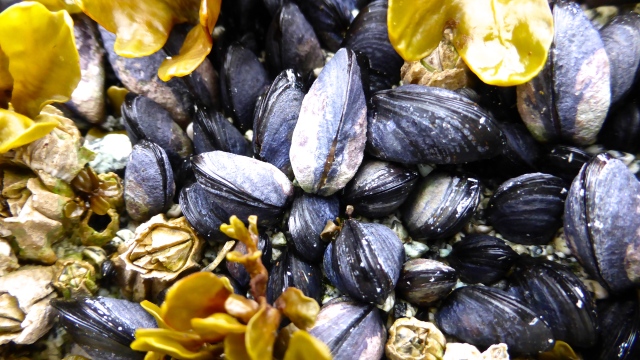 Rockweed, Mussels and Barnacles co-habit on the foreshore. 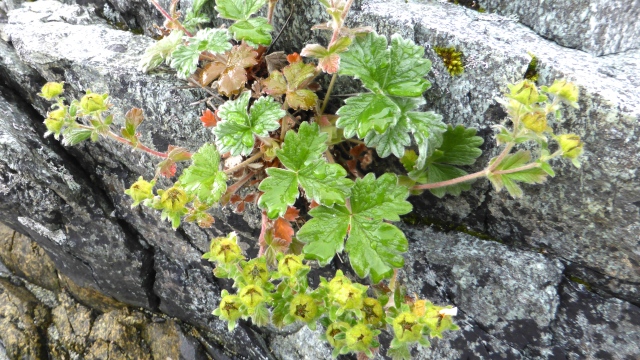 Behind the water line and on the rocks of the cliff face there were some Coastal Strawberry plants, Fragaria chiloensis. Unfortunately, these strawberries were not in fruit, so there was no possibility of personal taste test. We were told that the strawberries on this plant are not large like the horticulturally developed ones that we see in our stores; and they are not even as large and juicy as the ones we may grow in our gardens at home. The fruit of this plant are small, red, and are just a delicious little ‘pop’ in the mouth, best eaten immediately after picking. The fruit can be made into jam and the leaves can be infused to make a tea.

As its name suggests, this strawberry is native to Chile but it’s common on sand dunes and bluffs, never far from the sea, right along the coast lines of South and North America. 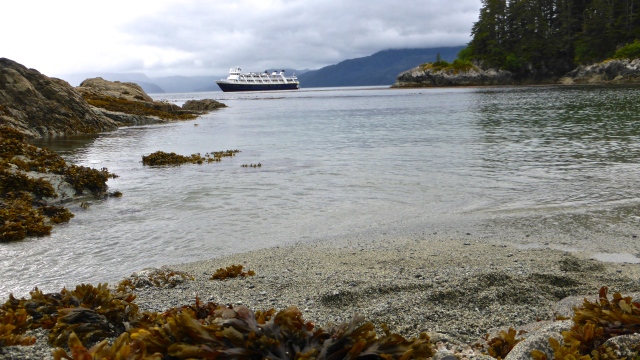 After a delightful wander along the foreshore, it was time to turn inland and climb up through the forest to see a World War II gun emplacement on the rocky bluffs above the ocean .

More of that in the next posting.