The morning of our last day in the Tongass National Park wilderness was overcast and misty. There was talk of rain. We hoped not. 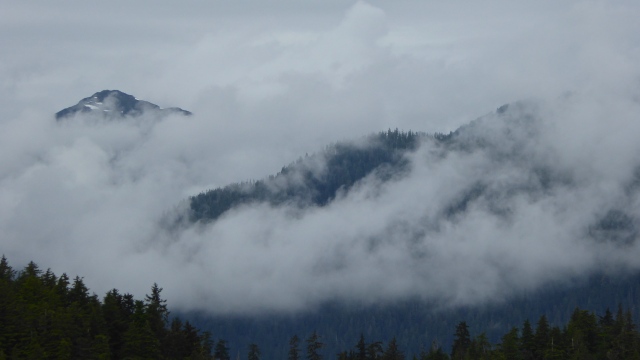 After breakfast, the clouds began to rise revealing the mountains. 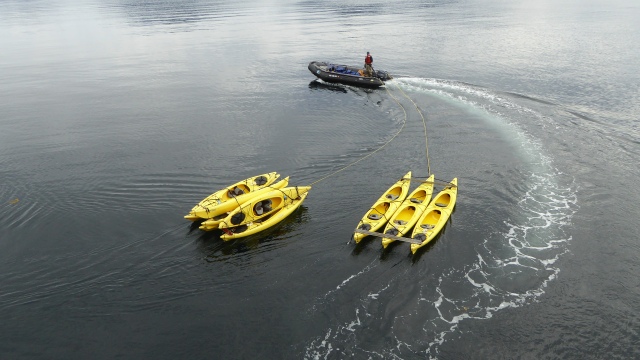 The crew dropped the kayaks into the water and everyone geared up for our last day in this pristine, wonderful part of the world… walking, kayaking or floating about in the DIBS (inflatables known as Zodiacs in Australia). 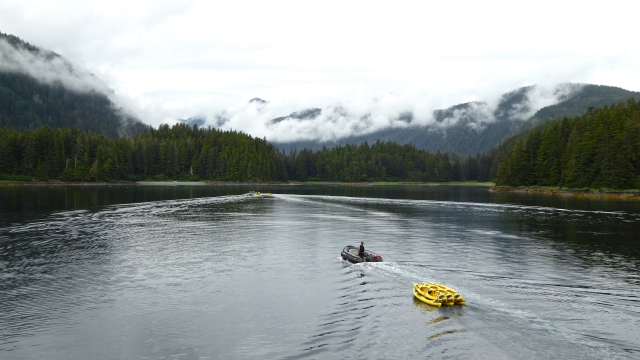 What a beautiful place! There was great anticipation amongst the walkers (David included) that this might just be the day that they would encounter a bear on their walk. The area is known for its bears and the salmon run was about to start in streams around this bay. 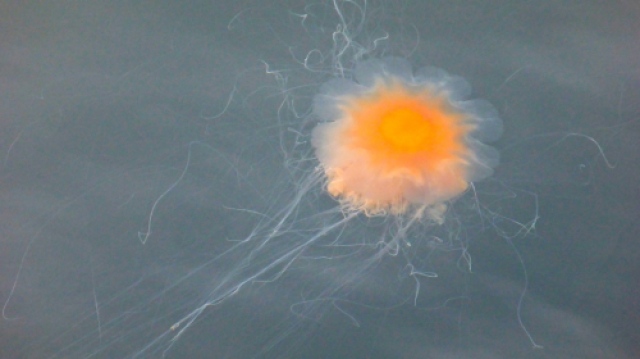 Several interesting jelly fish floated by as we were preparing to climb into the DIBs to go ashore. This one was the Lion’s Mane Jellyfish, Cyanea capillata.

Like all jellyfish, this one is ‘diploblastic’ which means it has two primary layers: the ectoderm, the inner layer of tissue associated with the gut, and the endoderm, the outer layer, which includes the nervous tissue.  The animal’s radial symmetry allows it to reach out in all directions from the centre, assisting their feeding.

But this jellyfish has some specialised characteristics. It doesn’t have a brain or eyes so it has to rely on nerve cells to sense and react to either food or danger. Some of its eight lobes have organs used for sensing odor and balance. And at the end of some of the lobes there are primitive light receptors!  It’s understood that these sensing organs tell the jellyfish whether they are heading up or down, and into the light or away from it.

Most of us know to beware of jellyfish and their stings; and the Lion’s Mane jellyfish is no exception. As you can see in the photo, there are many tentacles. In fact these animals can have up to 8 clusters each with 150 tentacles; Now, how’s your maths? I make that add  up to  1,200 tentacles per jellyfish… AND… one researcher recorded a  Cyanea capillata‘s tentacle at almost over 6 metres (200 ft) long… AND every single one of these enormous tentacles are lined with large amount of cnidocytes, the stuff that stings if you touch it. That’s impressive! One of the effects of the venom of the Lion’s Mane is ‘hemolysis’; the destruction of red blood cells. So stay well clear of these beauties.

And we did; we watched and waited until they floated by. But they don’t really float. They propel themselves using special muscles called coronal muscles which are embedded on the underside of the bell. These muscles push water out of the hollow bell. Then, as water is pushed in one direction, the jellyfish moves in the opposite direction.

Learning about them from our marine biologist was fascinating. 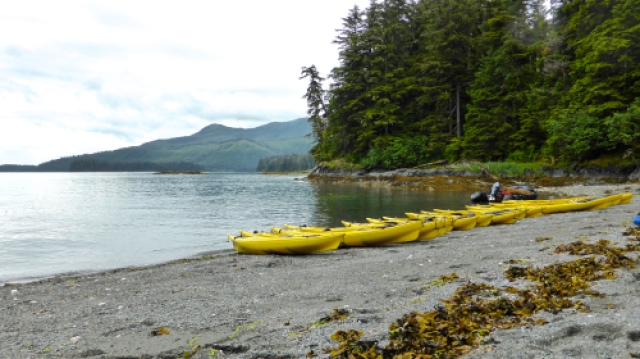 By the time we got to shore, the kayaks were lined up ready for those wanting to paddle their way around the calm waters of this bay. 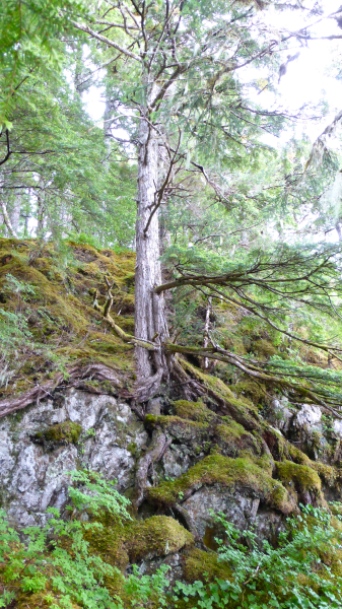 David and his group began their walk, going by this tree that was just clinging to the rock face. 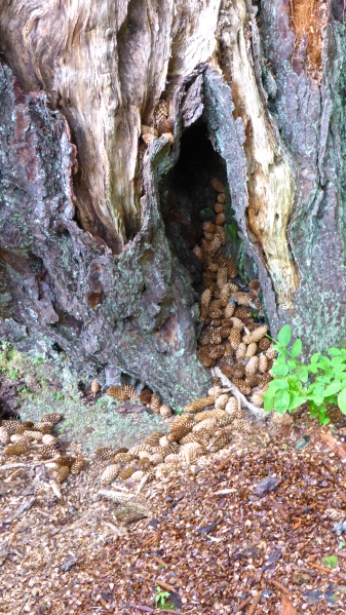 Another tree had a squirrel’s cache of pine cones in a hole at its base. 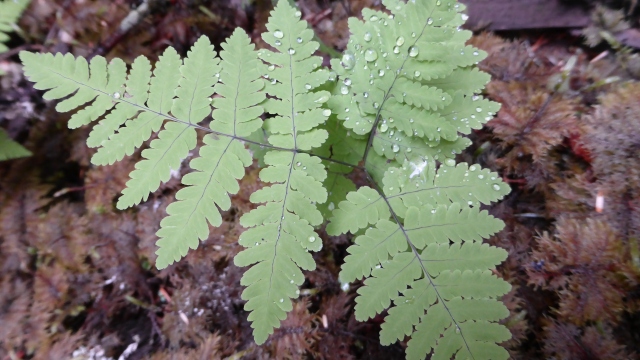 Nearby was a lovely example of the Narrow Beech Fern;  Thelypteris phegopteris. 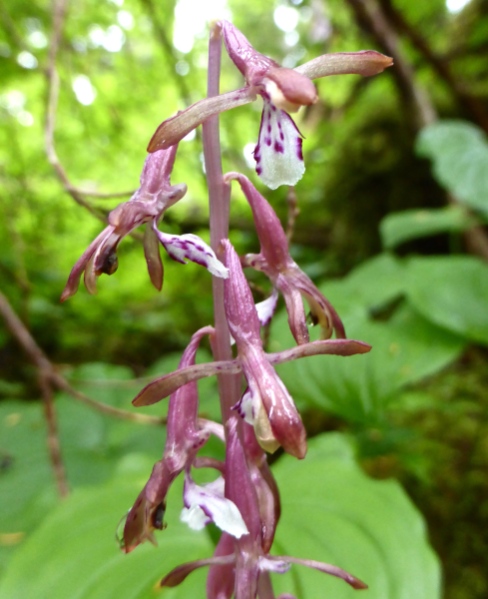 This Coralroot Orchid, Corallorhiza maculata, is named the spotted orchid for its spotted lip. But it’s named coral root because it has no roots; it has, instead, hard, branched rhizomes that look like coral. It’s a parasitic orchid deriving its nutrients from mycorrhizal fungi in the deep, damp humus and soils in the understory of coniferous forests. 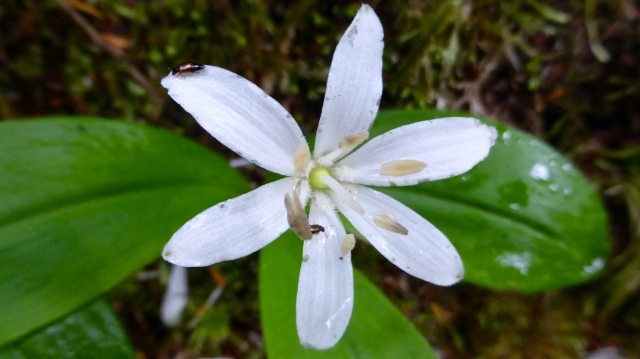 An Native of the Alaskan mountain forests,  Clintonia uniflora is a member of the lily family. It’s common names are bride’s bonnet and queen’s cup… neither of which seem to be very apt to me.

You have to look in the understory of the coniferous forests to find this delightful small white flower.  Two or three long, wide leaves are located at the base of the stem. 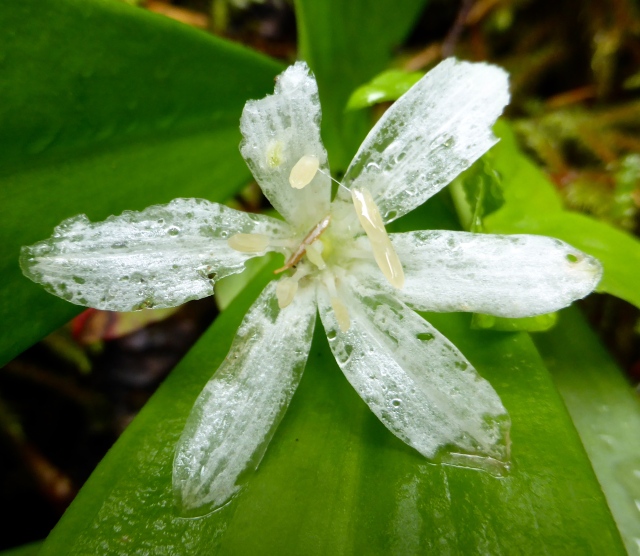 This flower will be replaced by just one round, blue berry, up to one centimetre wide. 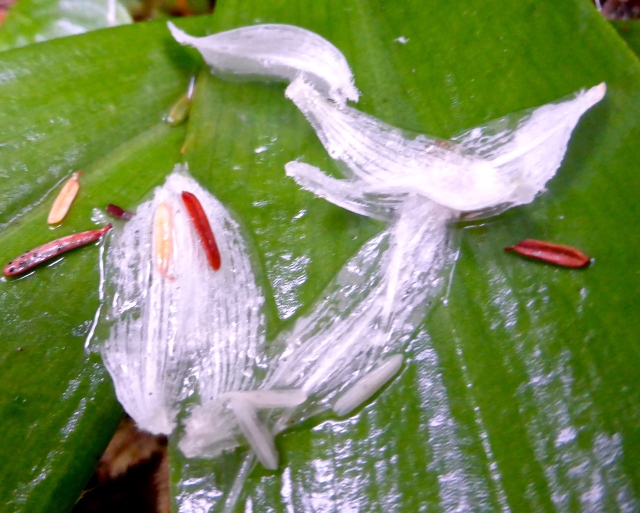 Dying petals look very delicate, almost translucent, adorned as they are with raindrops.

The forest canopy reflected in a raindrop; one of the joys of a walking in the rain! 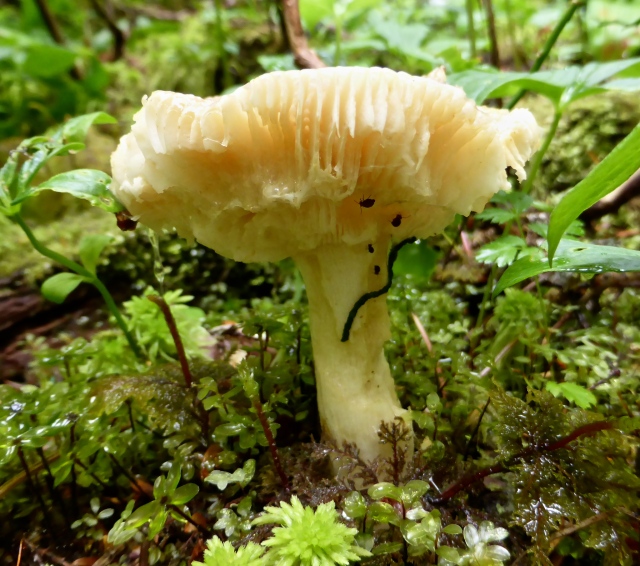 As usual in these forests, fungi abound, some like this one are very ‘architectural’. 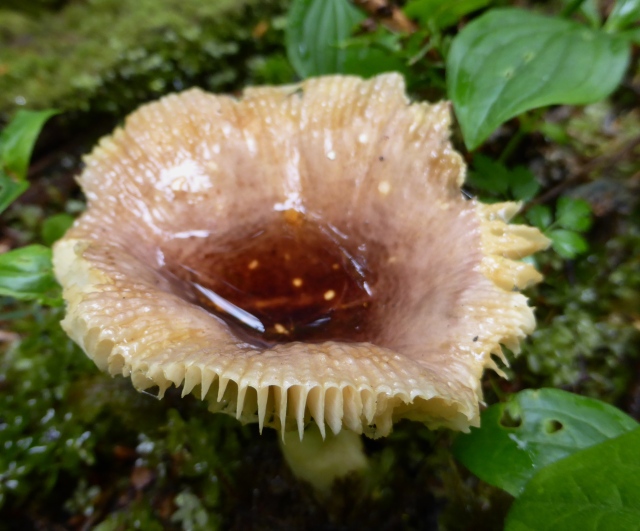 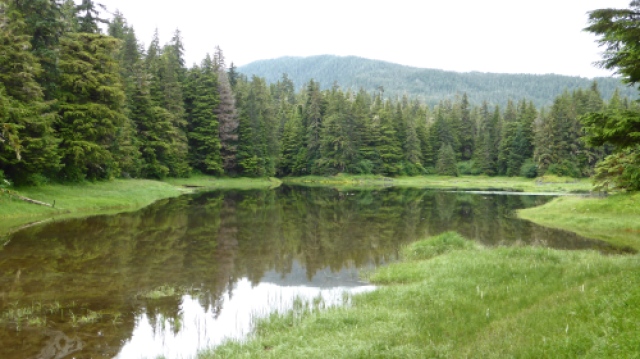 While David wandered on his flower spotting way through the forest, I was meandering in a DIB around the streams that run into the bay. 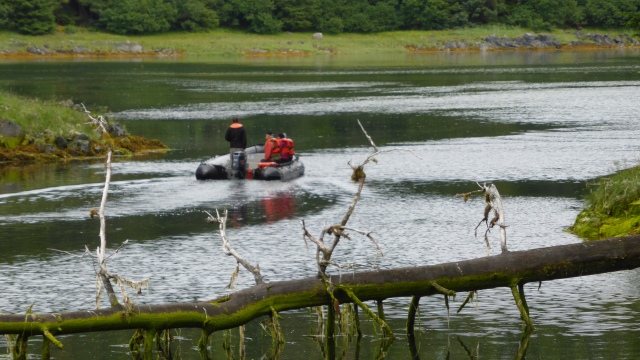 Every now and then we spotted each other through the trees. These streams are spawning grounds for salmon and I was enjoying Jason’s stories of the salmon as we floated along. 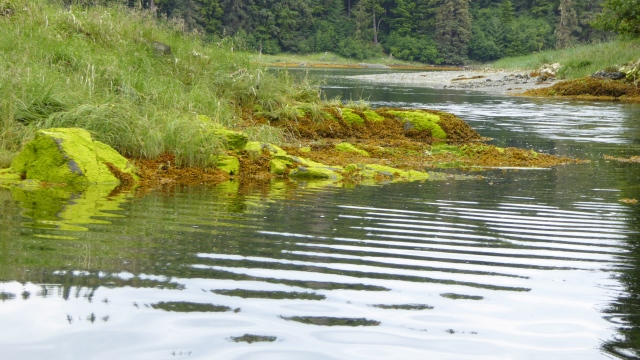 It was a delightful way to spend my last day in the Tongass National Forest. 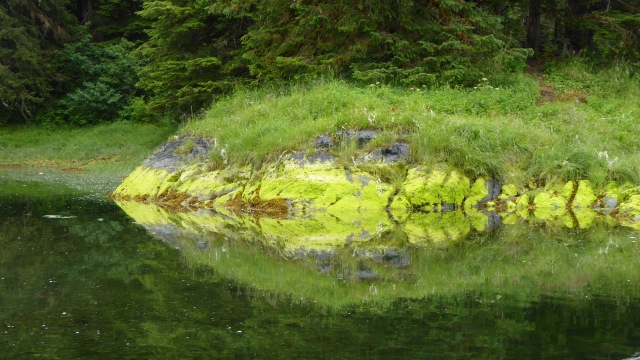 The reflections were perfect… if we sat still enough in the boat. 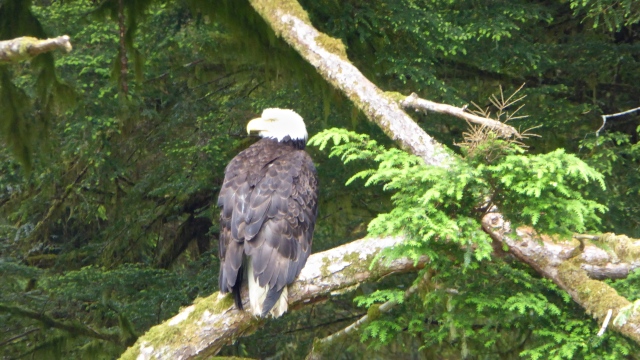 We found a pair of eagles to watch. They were watching for salmon! 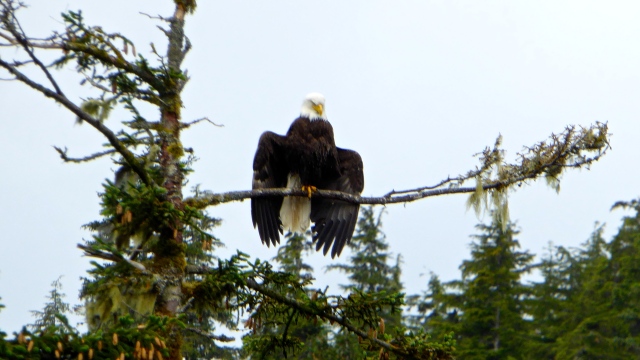 After a dive into the water (no fish on this occasion) it dried its wings.

We watched it… it watched us. We wondered what it thought!

They are such a magnificent birds ! 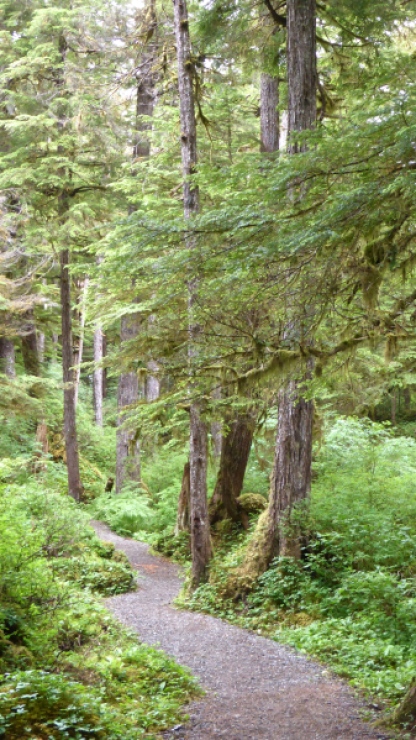 David walked on further into the forest but still following the stream. 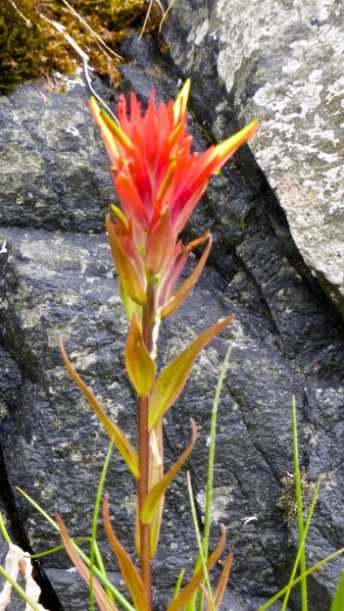 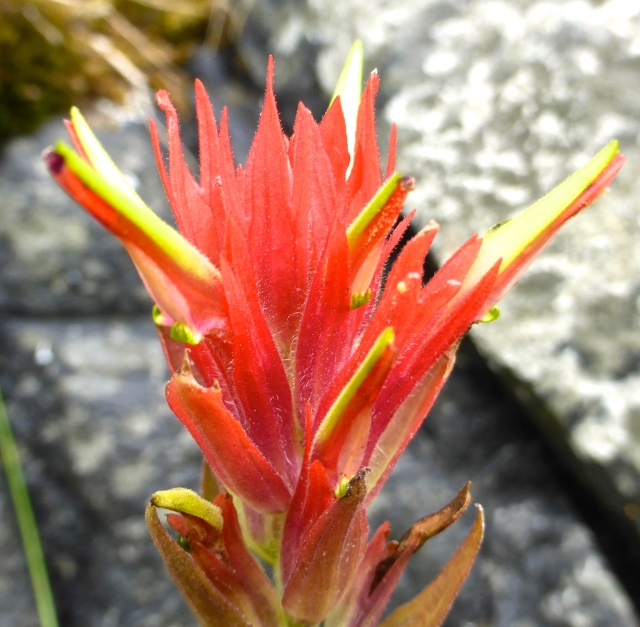 Always well worth a closer inspection. 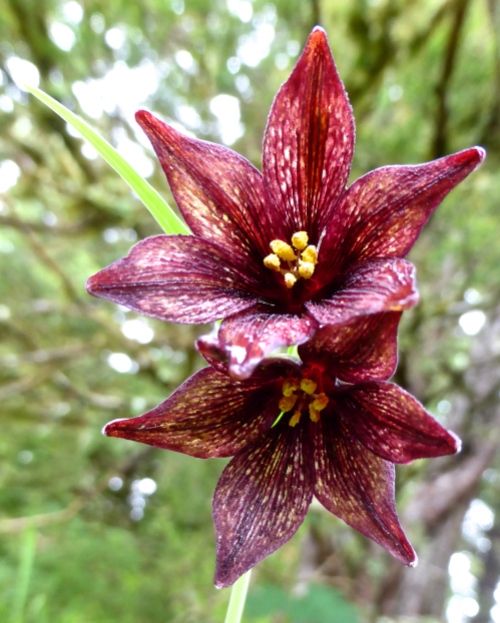 We had seen many example of the Black Lily or Chocolate Lily, Fritillaria camschatcensis, on our forest walks. The name denotes that it is native to Kamchatka on the far east Russian Peninsular where David had trekked a couple of years before. (Those stories are written up on www.dymusings.com)

I think I mentioned in an earlier post that this lily looks lovely but it has a really bad smell which it uses that to attract flies as pollinators. Before rice became available in quantity in these parts, the local native people of Alaska used the plant’s clusters of rice like, tiny white bulbs as food hence the other common names of Indian Rice or Eskimo Potato. Nowadays, the art of harvesting and cooking the lily roots has all but disappeared. 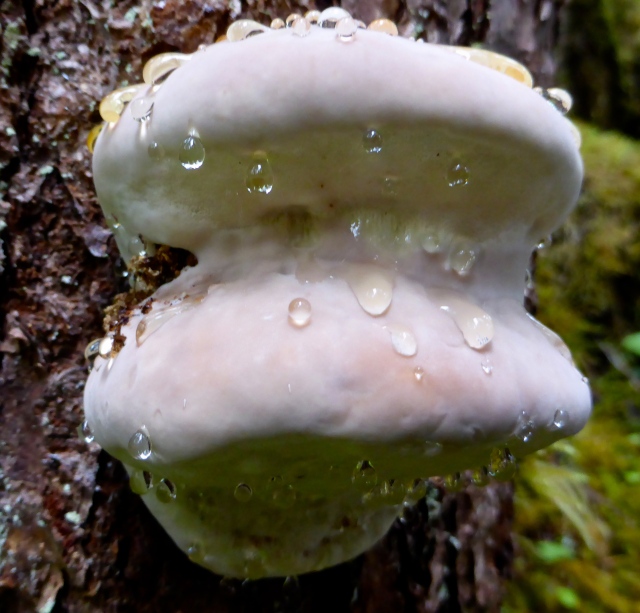 A good example of bracket fungi, a woody fungi that grows on tree trunks. 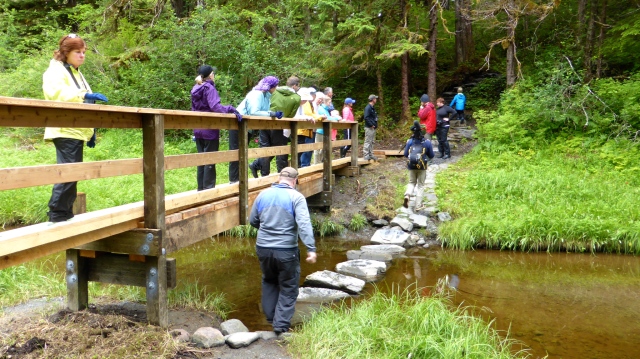 Further upstream away from the larger pond, the walkers had to cross a stream. 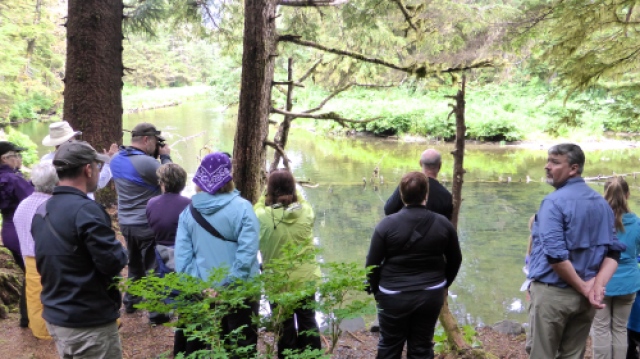 And not long after that, they were stopped in their tracks. What are they looking at? 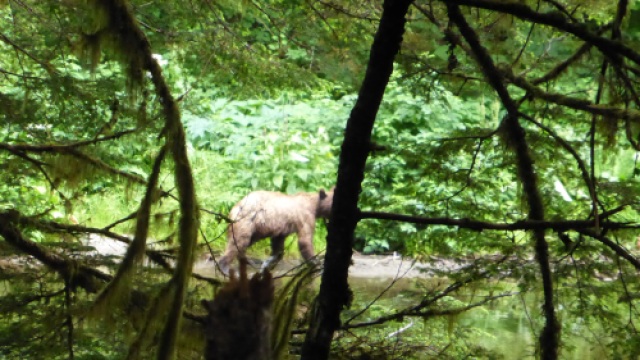 A bear! Yes, they actually came across a bear. Stand still. Don’t move. That’s the rule. 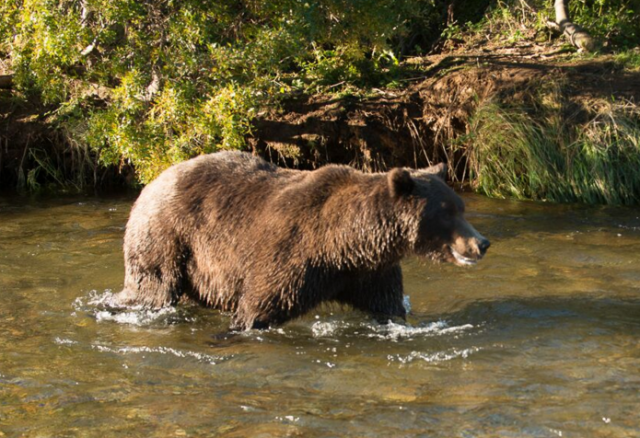 But the bear was not interested in them. It was looking to see if any salmon had come up the stream yet. The salmon spawning run was about to begin and this bear was ready!

And you can imagine the excitement back on the ship. Last walk. Last chance. A BEAR!

And so the forest walks ended on a very high, very satisfying note. But once the bear was seen, it was not wise to stay in that part of the forest, so it was back to the ship- quietly.

But once on board, the lunch room was a buzz of excited bear chatter. And after lunch, it was time to weigh anchor and sail for Sitka, our final port of call on this adventure through the waterways of the Tongass National Forest and the Inside Passage of Alaska.

If you enjoy these armchair travels, please pass this site onto others