After disembarking “Sea Lion’ we joined the other passengers in a ‘Tour of the Town’. Most of them had a lunch time plane to catch to Juneau or Seattle and so had time to fill in before their flights. Only a few of us had elected to stay in Sitka for an extra night.

On this tour we learned much about this city, really just a small town of just over 9,000 people. It’s a town with colourful past; a unique cultural and historical blend of peoples – native Tlingit,  Russian fur hunters and, since 1867, the far flung, northernmost state of USA. Accessible only by sea or air, Sitka was the first capital of Alaska.

Amazingly, Sitka is the state’s fourth-largest city by population in Alaska, after Fairbanks, Anchorage and Juneau.  It’s also the second largest ‘incorporated area’ in the United States, four times the size of Rhode Island. But that city area takes in much uninhabited area of mountains and part of Tongass National Park. The inhabited area is quite small.

This map shows the closeness of Alaska, outlined in purple, to the white mass of eastern Russia. The line of islands that extend out into the Bering Sea are just the tops of the mountain chain that extends into Russia’s Kamchatka, the long peninsular on the far left.

We’d been exploring the Inside Passage, the small area denoted in purple on the right, in the south of Alaska, (surrounded by Canada). Sitka is on the ocean side of that area.

To share something of Sitka’s story, I’ll use some of the words written about the town on their informative website. (see below for the link)

“Sitka’s history began as the ice, that covered much of Southeast Alaska, began to recede. According to a Tlingit legend, Mount Edgecumbe, a 3,200-foot-tall dormant volcano, located on southern Kruzof Island, was the smoking beacon that brought the original native Tlingit Indians to Sitka around 10,000 years ago.” (We were to visit a Tlingit Museum later in the day to learn more about their story.)

“Old Sitka was founded in 1799 by Alexandr Baranov, the governor of Russian America. Baranov arrived under the auspices of the Russian-American Company, a “semi- official” colonial trading company chartered by the Tsar Paul I. In 1802, a group of Tlingit natives destroyed the original establishment known as Redoubt Saint Michael (an area today called the “Old Sitka”) and massacred most of the Russian inhabitants. Baranov was forced to levy 10,000 rubles in ransom for the safe return of the surviving settlers.

Baranov returned to Sitka in 1804 with a large contingent of Russians and Aleuts aboard the Russian warship Neva. The ship bombarded the natives’ village, forcing the Tlingits to retreat into the surrounding forest. Following their victory at the Battle of Sitka,the Russians established a permanent settlement in the form of a fort named “Novoarkhangelsk” (the name of the Russian town near which  Baranov was born).  In 1808, with Baranov still governor, Sitka was designated the capital of Russian America.”

The inscription on the statue of Baranov (1747 – 1819) states that he served as the colonial governor of Russian America from 1790 to 1818. Considering his early battles with the native Tlingits, a quote from Baranov on the inscription seems a little odd:  “that we may dwell in amity and peace forever in this region.”

The Russian Orthodox Cathedral of St. Michael was the first place that we visited on our tour of Sitka.  It was originally built in 1848 as “the seat of the Bishop of Kamchatka, the Kurile and Aleutian Islands, and Alaska.”

“The original church burned to the ground in 1966, but was restored to its original appearance, with the deliberate exception of its clockface, which is black in photographs taken prior to 1966, but white in subsequent photos.”

The Cathedral was open and we were able to enjoy this example of the Russian cultural influence and architecture that still exists in the town of Sitka today.

The interior has the usual Russian Orthodox cruciform plan. The walls and ceiling have an unusual, rough, natural coloured sail cloth covering. It’s a replica of the original covering in the Cathedral that was destroyed by fire in 1966.

Although so much of the church was destroyed, fortunately, many of the original art pieces, icons, religious objects and the chandelier were saved or salvaged and restored. They are displayed and in use inside the new structure.

Wealthy Russians and Imperial government officials donated many of the art pieces to the church in the early 19th century.  These include the beautiful ikon screens dividing the nave and the chapels from the inner altars. These doors and the wall of icons and religious paintings, were the most treasured items retrieved from the fire in 1966. 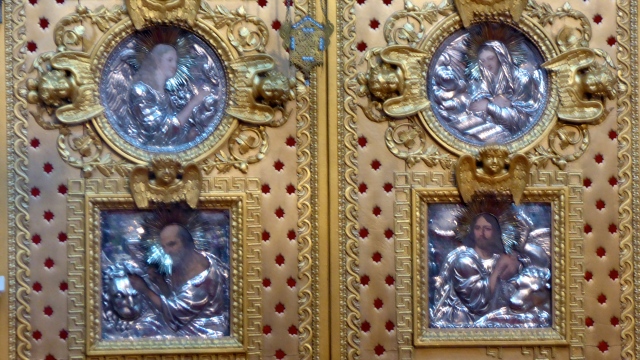 Some of the icons in the doors.

Detail of one of the icons. As is usual in such icons, a painting of the person represented by the icon appears behind a silver outer representation of part of the painting.

The original large and very beautiful icon of the Last Supper was lost in the fire. This is a faithful replication.  Unfortunately, some other important items lost in the fire have not been able to be replaced including the large library containing books in the Russian, Tlingit and Aleut languages. 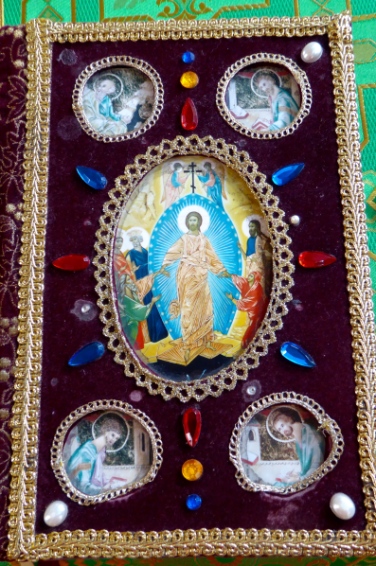 One of the items saved from the fire.

Crowns worn by the Bishop of the Cathedral.

Many of the silk and brocade vestments were retrieved from the fire and are now in use again. Although the church is open to the public as a heritage building, it’s still used daily for worship by the many people in Sitka who have Russian ancestry. 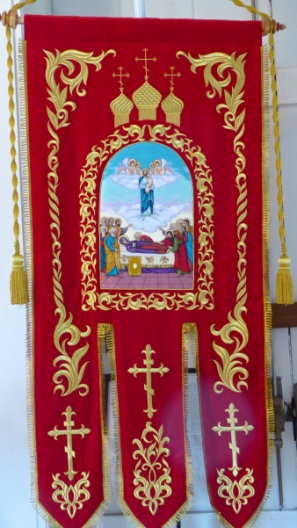 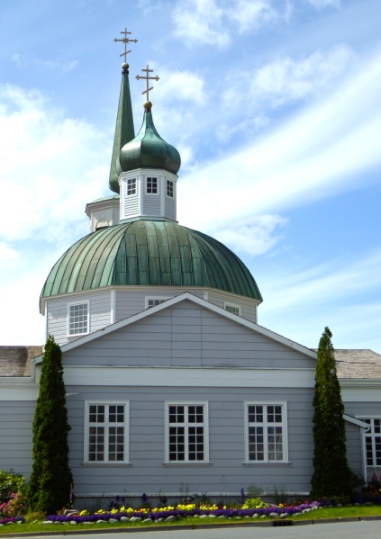 Reconstruction of the Cathedral was based on 1961 drawings of the old cathedral. That allowed the building of a replica to the same measurements at the same location, but with modern fireproof material used in its construction.

The original cathedral was built of logs and clapboard siding with wood shingles. This new one is built of fire retardant materials; concrete and steel walls, vinyl siding and asphalt shingles. The domes, instead of the old metal, are now made of copper. It should stand the test of time to help maintain the Russian heritage of this town for many years to come.