The next stop on our ‘Tour of the Town’ of Sitka was at the Raptor Centre. Here, up to 200 injured birds a year are taken in for treatment. The aim is to restore the birds, if possible, to the wilderness.

Raptors are meat or fish eating birds that hunt for their food. They need to be healthy to hunt and survive on their own in the wild. Some of the birds being treated are kept in this large room where they can safely begin to learn to fly again. They may have had broken wings or other bones, gunshot wounds or have been poisoned, usually unintentionally.

We were told that about 85% of the injuries treated at the centre are due to human  intervention in the natural habitat of the birds. Most injuries are caused by collisions with power lines, cars and other man-made objects. Poisonous chemicals at dumps and those used on lawns and gardens can cause poisoning if what the birds eat is polluted. Birds become scavengers… its an easy way to hunt! Others are caught in fishing lines and tackle left lying around. One of the centre’s aims is to make us all aware of the consequences of our actions, on birds in particular, and the environment in general.

The Raptor Centre’s symbol is the American Bald Eagle, Haliaeetus Leucocephalus, the bird adopted as the national bird symbol of the United States of America in 1782. It was chosen for its majestic beauty, great strength, long life, and because it’s native to the USA. This symbol is on many of the gift shop souveneirs, the sale of which helps pay for the recovery of the birds. We chose a glass bauble with an eagle for our Christmas tree collection.

One eagle, which can’t be returned to the wild because of his injuries, has been trained to be the ‘meet and greet’ bird at lectures given at the Centre. He was so well behaved! 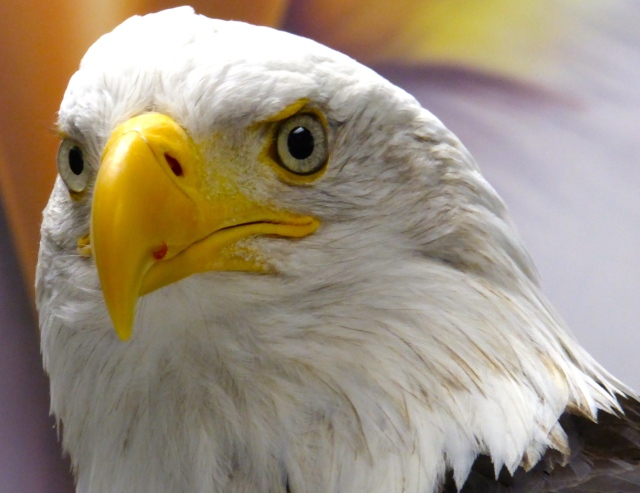 It was amazing to be able to get up fairly close and personal with such a bird. He showed off the main characteristics of all raptors; sharp eyesight, a hooked, sharp beak and strong feet with sharp talons. They are not birds to be played with!

Even though the bald eagles are a well known symbol of USA, they were for many years on the list of endangered US birds. Why? In the ‘lower 48 states of the USA, the bald eagle populations were almost wiped out by DDT, heavy metal poisoning and loss of habitat. By the time DDT was banned in 1972, there were fewer than 450 breeding pairs left in all of the continental United States. It was on the Endangered Species List from 1978 until July 1999 when it was down listed to ‘threatened’. Now, the bald eagle population is estimated to be about 100,000. Half of those are found in Alaska.

Although never a threatened species in Alaska, there was a bounty on bald eagles from the early 1900s to 1950. As a species of sea eagles, the main diet of bald eagles is fish; salmon and herring in particular. The bounty was placed because the birds were thought to be in competition with local fishermen for the live salmon. They were! But the fishermen have had to learn that they must live with the wildlife of the area and that includes eagles, seals and whales. It is we who have invaded their habitat.

The bald eagles, like these two, that have been treated satisfactorily at the centre, go through various stages of rehabilitation until they can be released back into the wild.

But some cannot be released for a variety reasons. Those birds may be placed in captive breeding facilities around the country so that their offspring can be released to help restore wild populations. Others are placed in zoos and other educational organisations to help educate the public about raptors. 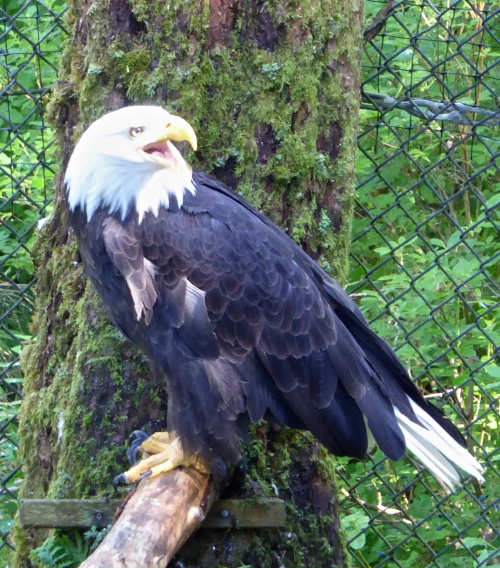 This bird, in an outer enclosure, showed off its extremely sharp talons and its not so pleasant personality. ‘Leave me alone, or else…’ seemed to be the message! It’s a sign of good rehabilitation as it needs to be wary and wild to survive in the forest. The white head and tail mark this bird as an adult. Immature bald eagles are a mottled brown.

A bald eagle has about 7,000 feathers, fluffed out here for our closer inspection!

An even closer look at those head feathers.

And that’s some wingspan! 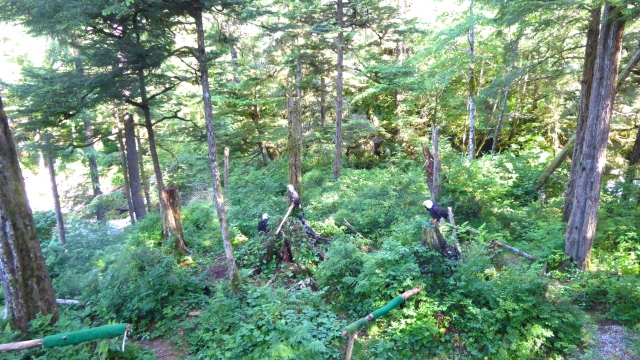 The large outer forest area of the Centre is the final stage in rehabilitation where the birds practice life ‘in the wild’ before being released to fend for themselves. Eagles can live for thirty years or more… so, hopefully, these birds will survive for many years to come.

This Red Tailed Hawk, Buteo Jamaicensis, was one of the raptors in the rehabilitation area. These hawks are found in every US state except for Hawaii. They play a very important role in the management of the rodent population. That beady eye can spot a mouse more than 30 m (100 ft) away. One hawk can eat more than 1,000 mice a year. That makes these birds more efficient than pesticides and far less harmful to the environment and other birds.

There are two main groups of raptors. The diurnal raptors, like eagles, hawks, falcons and kites, hunt during the day. But nocturnal raptors hunt at night. These include most of the owls. In the USA, there are 34 diurnal raptor species and 19 species of owls. 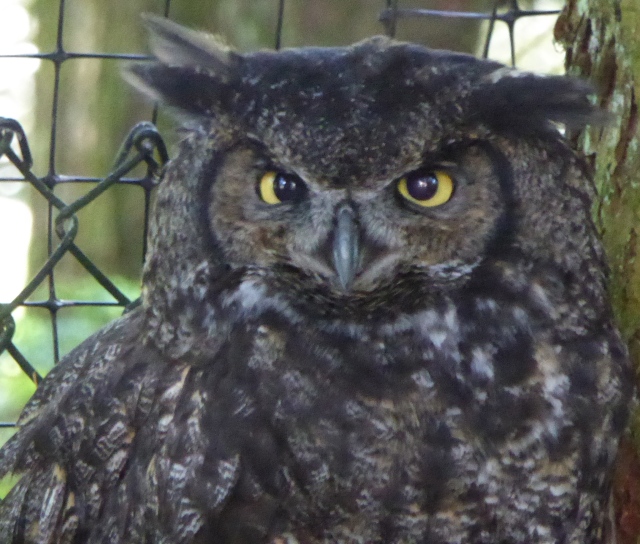 One of the owls being cared for at the Centre was this Great Horned Owl, Bubo virginianus. It’s common name is a bit of a misnomer! The tufts on top of its head are not horns, just feather tufts. This is one of the largest owls in the USA and can survive in habitats as vastly different as the hot, dry, desert canyons of Arizona or the cold, wet rain forests of Alaska. Like most owls, their feather design allows them to fly almost silently, enabling them to stealthily hunt for prey such as mice, squirrels and frogs.

My favourite owl was the the Great Grey Owl, Strix nebulosa. How could you not fall in love with that wonderful face? I was keen to learn more about this bird.

The Great Grey Owl is one of the world’s largest owls and has the largest facial disc of any owl. It has asymmetrical ear openings that are surrounded by feathers which help to funnel sound towards the ear. This allows the bird to detect the slightest noise made by prey such as voles and mice (This is another bird that is rodent destroyer!)

Great Grey Owls are forest dwellers and have a circumpolar distribution ranging from Alaska to Easter Canada and across the northern forests of Europe and Asia. They are very reclusive and rarely seen in the wild so it was special to see one up so close.

Like most owls, Great Grey Owls don’t usually build their own nests. In Alaska, they often use abandoned Northern Goshawk nests. The success of the owls raising their clutch of one to nine eggs is highly dependent on food source that year. In low food years, no eggs may be laid at all. The male provides food for the female during the 30 days that she sits on the eggs, and also for the nestlings for three weeks after hatching. It surprised me to learn that the young owlets are proficient climbers! They leave the nest and climb around in the trees for several weeks before they learn to fly. Even after they finally fledge at about eight weeks, they may stay near to the nest for several months.

I spent so much time learning about this owl that I almost missed the bus! So whatever was left for me to see at the Raptor Centre will remain a mystery to me. We were soon on our way to our next centre of interest, the Sitka Totem museum.

There you’ll find some really great photos. I can’t compete with them! You have to be a dedicated, professional bird photographer with excellent gear to get shots like these. 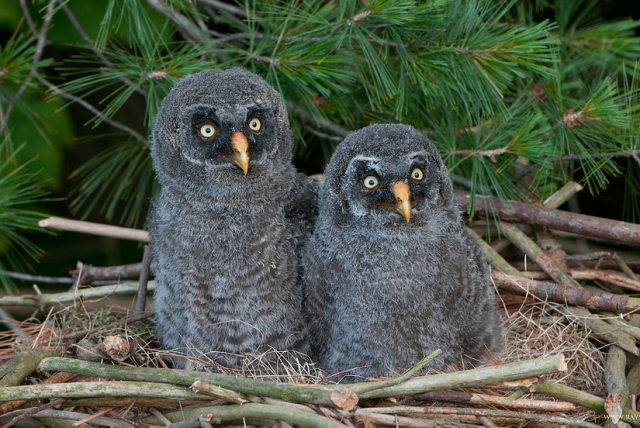 Isn’t it great that, via the web, we can see such excellent nature photography.