Sitka National Historical Park is a forested area of Sitka, close to the water’s edge, that showcases the cultures of the native peoples of the coast and their totem poles. All of the poles in this forest park are seen as ambassadors for Alaska and its native peoples. Not only do the totem poles have a fascinating story, but so does this out door museum. I’ll use the National Park’s web site words to tell the story of how these poles came to be here.

“… it is hard to imagine a time when (these poles) were not part of the surrounding forest. Their history, however, tells a very different story– a story that begins in the coastal villages of southeast Alaska and ends, after traveling more than 6,000 miles by revenue cutter, steamship and rail, (to finish up here) in Alaska’s first National Park.”

After the USA acquired Alaska from Russia in 1867, the problem arose as to how to generate interest in Alaska and draw people to settle the area.

In the early 1900s, Alaska’s Governor, John Green Brady, was asked “to create an exhibit publicising Alaska for the Louisiana Purchase Exposition to be held in St Louis in 1904. His answer involved showcasing one of the region’s most recognisable features: the towering totem poles carved by the Native peoples of southeast Alaska. In Brady’s mind, a display of totem poles would draw people to the exhibit.”

“Once there, they would learn about the “real” Alaska through displays of raw materials, agricultural products and unique curiosities. Brady hoped visitors would form a new impression of Alaska: that of a place ready for tourism, settlement and development.”

The word totem means ‘kinship group’ and totems are thus emblems of tribes or groups of people such as a family or clan. Animal totems or emblems, also reflect the lineage of a tribe, reminding them of their ancestry or their mythical past and creation myths.

Each one of the animal totems had a special meaning, characteristics and significance. For example, a frog meant Spring & New Life, Sensitivity, Good Communicator, Stability.

With ‘westernisation’ and a drift by people from villages to towns, Brady was concerned that traditional art “appeared to be disappearing from sparsely populated coastal villages. (He) conceived the idea of collecting totem poles and bringing them to a place where they could be preserved and people, including tourists, could view them.”

“Between 1903 and 1904, Brady toured southern southeast Alaska’s Tlingit and Haida villages by ship, asking leaders to donate poles and other objects for the exposition. After several voyages, he was promised poles from the villages of Old Kasaan, Howkan, Koianglas, Sukkwan, Tuxekan, Tongass, Klinkwan, and Klawock. It was especially remarkable that Brady was given the poles as gifts, because more than one professional collector had tried to purchase poles from these same villages and had been refused. Trusting in Brady and looking to the future, these leaders chose to share their cultural heritage with the world, even if it meant parting with it.”

And so it was that “in the spring of 1904, 15 Tlingit and Haida totem poles, two dismantled Haida houses and a canoe were delivered to the St. Louis Fairgrounds.”

The Louisiana Purchase Exposition (in St Louis) proved to be a truly spectacular cultural event. Massive “palaces” showcased amazing technological advances like electric lighting, the wireless telegraph and the automobile. Although exploitive by today’s standards, anthropological exhibits of indigenous peoples drew huge crowds. The elaborate fairgrounds covered more than 1,200 acres. An astonishing 18 to 19 million people visited the fair between April and December of 1904. For most of them, it was an experience they would never forget.”

“At the close of the exposition, the remaining poles traveled to the Lewis and Clark Centennial Exposition in Portland for another exhibit there in 1905. Portland was a much smaller exposition. Between June and October, 1,588,000 visitors toured the 400 acre fairgrounds along the Willamette River. Accompanying a reduced exhibit in the Government building, the totem poles and canoe stood in a linear arrangement on the shores of a man-made lake on the fairgrounds.”

“When the Portland fair closed, the poles began another long journey, this time home to Alaska. They reached Sitka in January of 1906, where Brady’s concept of a totem pole park would be realised. Before the poles could be installed, they were repaired by skilled local craftsmen, most of them Native graduates of the nearby Presbyterian Mission School. Prisoners from the local jail contributed heavy labor to the raising of the poles. The actual arrangement of the poles however, was orchestrated by local photographer E.W. Merrill. Sources indicate that in aligning the poles along the seaside path, Merrill intended to preserve some of the feeling of a traditional village. By March, Brady’s vision of a collection of totem poles preserved in Sitka’s popular park had been realised.” 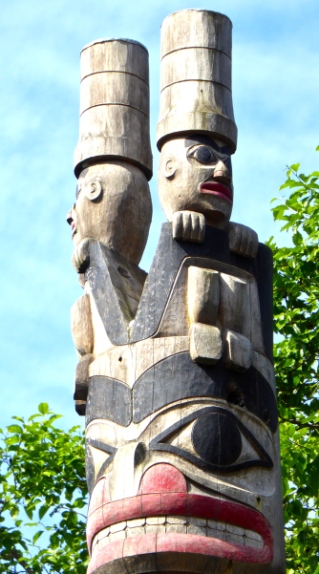 “Perhaps the most remarkable thing about the poles is that they continue to fulfil their purpose. Just as the original donors intended, the preservation and display of these objects have provided a lasting memorial to their cultural heritage. Just as Governor Brady intended when he began his efforts to preserve and display Alaska’s totem poles more than 100 years ago, the totem poles of Sitka National Historical Park remain powerful symbols that draw people to Alaska and provide a tangible link to the past.”

“The totem pole collection has changed since it was first placed there in 1906. Over the years, caretakers patched, painted and finally re-carved the poles.” The carvers have not been forgotten. They are also celebrated in this park.

If you look closely at the poles you can see that sometimes the carver has played a joke; the owner of the pole may have been portrayed, embarrassingly, naked; or figures carved may have been carved upside-down,”accidentally” ; or maybe a little figure or two grinning and peeking out of Whale’s blowhole or an animal’s ear. All a valid part of tradition.

Carved many years ago from mature cedar trees, many of the original poles are gone… but their stories live on – along with newer poles like this one, the Centennial Pole. Painted Totem poles are not necessarily fakes: it’s the carver’s choice whether to add paint to his creation or not.

Before we leave the totem poles stories, let’s explode some totem pole myths:

To find out more about totem poles, their symbols and meanings, just ask Google or check out the links below: