We thoroughly enjoyed wandering in the old town of Sitka on our own, at our own pace, stopping to talk to the locals and trying to get a feel for this outpost of civilisation.

Most of the old town consists of just one street; clean and tidy. Time to check out the windows and stop for a chat with the shop keepers. A very pleasant afternoon.

Two old men sat outside a shop filled with bric-a-brac and Tlingit souveneirs. There was a third chair; vacant. So where was the third of this trio? …. gone fishing, of course! As soon as we told them that we were Australian, they warned us that we wouldn’t be able to buy anything from them as we wouldn’t get it through customs back home. True. But they invited us to go in for a look anyway and went back to watching their ‘world’ go by from their plastic chairs. Such friendliness! And trust! 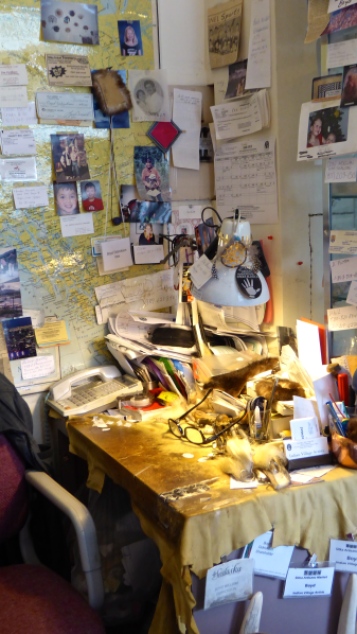 Their office was a bit higgledy piggledy… to put it mildly.

Many artefacts were made from whale bone or walrus tusks; fascinating but certainly not for taking back to Australia.

A stylised symbol made from shell buttons. 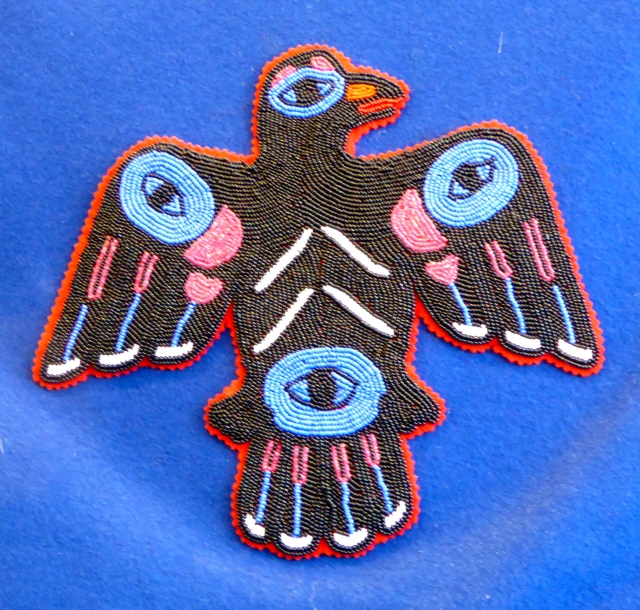 An embroidered Tlingit raven symbol… loved the eyes! But you wouldn’t want to have this on the wall at home… you’d feel those eyes watching you all the time.

I think this is supposed to represent a baby seal.

And would you want this on your lounge room wall?

It was a delightful visit to an unusual shop. 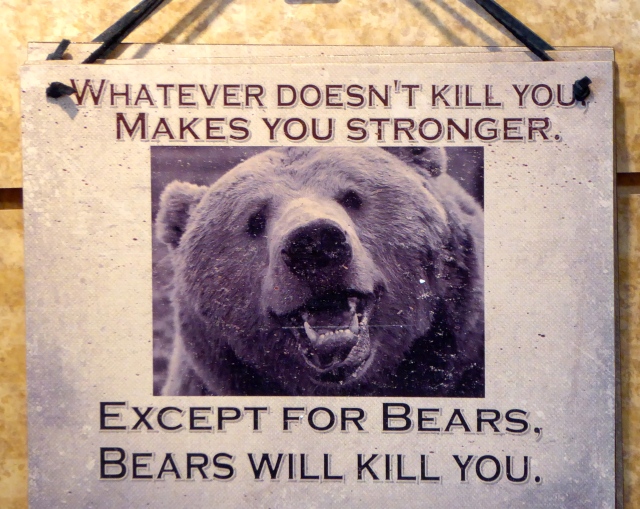 A little further down the street, I saw this sign… a very true saying!

And this bear shows why! David was glad that it was a stuffed version.

I believe this was the fur of a wolf but am not certain.

David ‘ummed and ahhed’ over this but decided not to buy!

At the end of the main street was a hedge of roses. 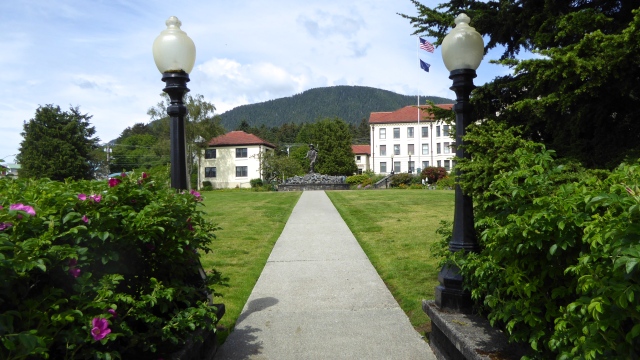 And behind the hedge, was an inviting path that lead to ‘The Pioneer Home’, one of Sitka’s many historic structures. It’s an aged peoples home. I found notes about it on the site of the Alaskan Department of Health and Social Services. It’s an interesting story. I quote:

“The Sitka Pioneer Home has a rich history that is woven into the state and territorial story of Alaska. The home had humble beginnings as a log barracks that had been built by the Russians in the 1800’s.

A contingent of the U.S. Marines was stationed in Sitka in 1879, and until 1892 the men were quartered in the Russian built log barracks. Buildings were added in subsequent years. The base had expanded, but was closed in 1912 and the buildings stood idle. The people of Sitka were anxious to have a home for the increasing number of pioneers, prospectors, and others who were no longer able to care for themselves.

Alaska became a Territory in 1912 and in August of that year a bill was introduced by Sitka’s Representative, Arthur G. Shoup, to appropriate $10,000 and establish the Alaska Pioneer Home at Sitka. The Navy Department gave permission to use the old barracks for that purpose and the Home opened in September 1913.

Only indigent men were admitted to the Home in the early years. By the early 1930s, in addition to being something of a fire trap, the buildings were becoming dilapidated and expensive to maintain. Congress enacted a law granting the former Naval Reserve to the Territory of Alaska.”

“It was at this time that the present concrete building was constructed. The new building housed 170 men but there were no facilities for women. The 1949 Legislature provided funds for a women’s Home, and a former church, adjoining the Pioneer Home, was purchased for that purpose. The arrangement was not wholly satisfactory and in 1956 the new North Wing was added to the main building. It housed women and married couples at first, and later was occupied by single men and women, as well. The building has since undergone remodeling and renovations. The most recent renovation was to add a living space in the North Wing to provide care for residents with Alzheimer’s Disease and Related Dementia.

Today’s Sitka Pioneer Home has a capacity to serve 75 men and women and provides care at three different levels:

The Sitka Pioneer Home is an Eden Alternative® Registered Home. The home is committed to providing compassionate care to residents, staff, family and community in a home that nurtures the human body, mind and spirit while preserving dignity and individuality.” ​​

The garden there was bright with flowers. A nice touch.

Wandering back up the other side of the street, we noticed this jeweller’s shop display… crystals representing the water drops off a whales tail… very effective.

Several of the shops here had a very Russian ‘flavour’; many people are descendants of those early Russian settlers. Our Christmas baubles from here were very Russian.

An example of modern art in an old town.

We loved these no smoking signs… first noticed them in Juneau. It appears that they have had a development in style over the years. This one’s copyright date is 1983. 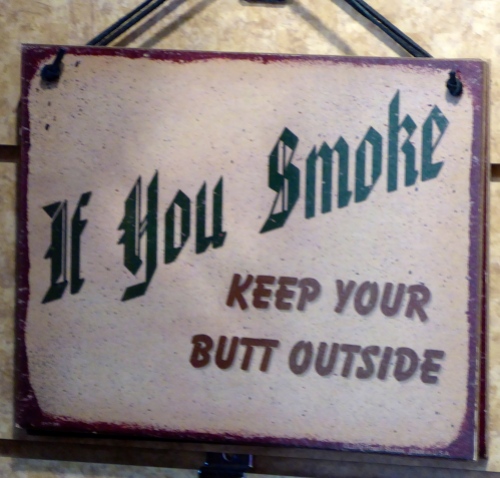 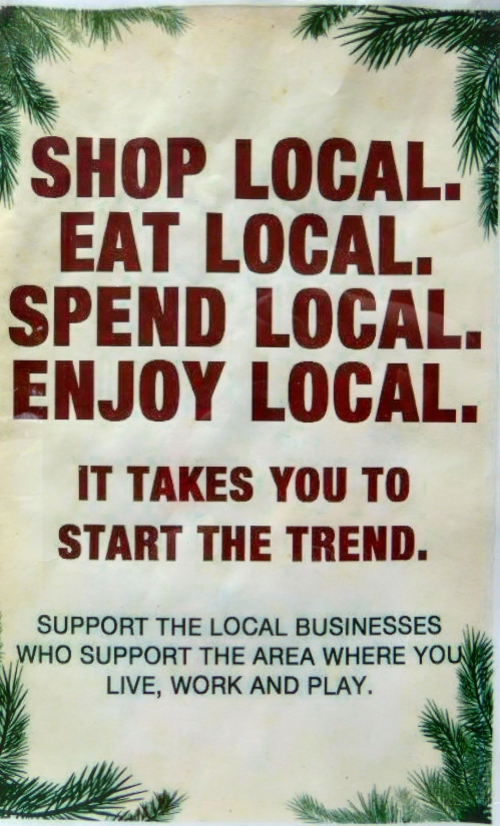 I liked the message on this sign… one we can all take heed of no matter where we live.

And so almost back to the hotel and time to try out the Sitka coffee and cakes! We sat in the bay window in old well worn arm chairs and had our turn at watching Sitka go by! And very relaxing it was too… not a lot to stress about here.

We had time to muse about our fantastic experience in this part of the world, exploring the Inside Passage and the Tongass National Park aboard the good ship ‘Sea Lion”. But, as usual, holidays and good times have a habit of coming to an end. We would soon enough trade this quiet little town for the bustle of Seattle. But first we had to get there and that meant hoping that our plane would not be fogged in, rained in or otherwise have a reason to not depart on the morrow! Nothing is ever certain in Sitka. More of that anon.