We’d arrived in the bustling city of Seattle after days out in the wilderness of Alaska’s Inside Passage. We had no Captain to guide our way here. We needed to get a map, get our bearings and find out how to make the most of our couple of days in this city.

Thankfully, getting around the city is relatively easy, especially when you get hold of the city’s transport PDF colour coded map. Then all you need is an ORCA ticket. Whether you take a bus, ferry, streetcar, light rail or rail, or a combination of these, one card is all you need. You can top up on the internet or at vending machines.

The map is great but what it doesn’t show is that this is a hilly city… those streets might be straight but they are certainly not flat, especially from the centre of the CBD down to the waterfront! So getting to know the transport system is a good idea. 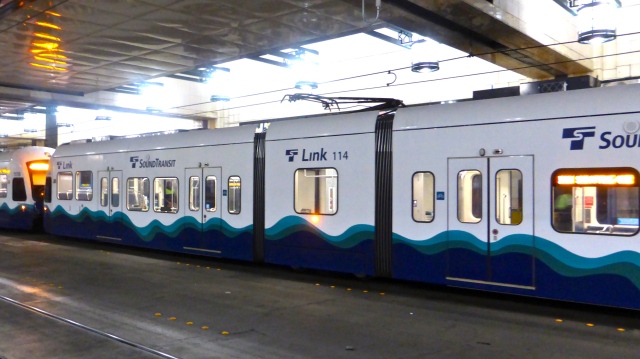 So what are the options? Getting from the airport is simple. Walk from the terminal via a walkway to the Link Light Rail station and catch the train to the city centre. Easy!

Link light rail travels from Sea-tac Airport to Westlake Station, right in the very heart of downtown Seattle It makes 11 stops along the way and runs every 6 to 15 minutes depending on the time of day. Adult fares range from $2.25 to $3.00 depending on how far you travel. And seniors, like us (over 65) pay just $1. So,so much better than a taxi! 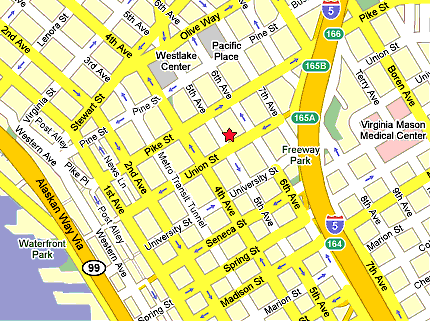 We chose a hotel in Olive Way (centre top of map), very close to the Link light rail station which ends its journey underneath the Westlake Shopping Centre. 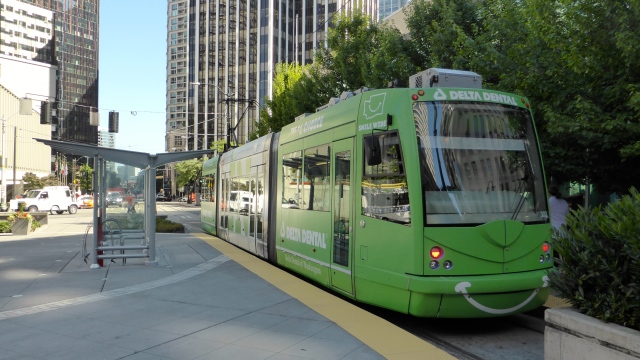 Right out in front of our hotel was the ‘streetcar’ terminal. Those who know David well will know that he is a transport buff, particular of trams. This was perfect.

There are two tram lines at the moment in Seattle. This one goes down to the South Lake, a pleasant waterfront park to visit. The tram blurb says that Seattle is in the process of building a modern streetcar system “that will strengthen connections among the places where people live, work and socialise.” Good on them!

We love this sort of transport in a city. Trams run on rails… they go to somewhere and come back the same way. You can’t get lost! And you see so much along the way. 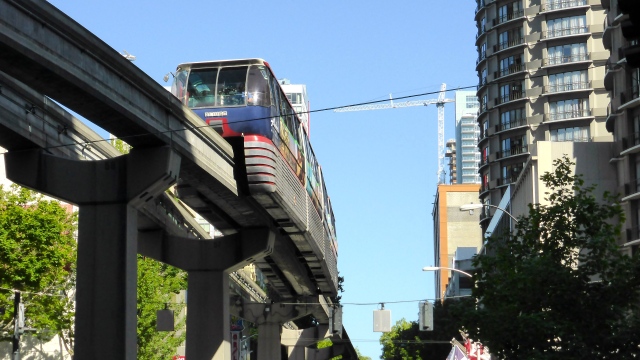 Also right in front of our hotel, and crossing over our street, was the monorail. The station is inside Westlake shopping centre. The monorail cost $3.5 million to build back in 1962 when it carried millions of people from the CBD to the World Fair site. It still carries up to 2 million visitors a year to the Space Needle and Chihuly Glass Exhibition (which we’ll visit later in this series on Seattle.) Again, the senior fare is just $1… one advantage of age!

The main city transport is the trolley bus system… again with stops right in front of our hotel!  If using an ORCA card, you simply tap on at a machine as you get on and and then tap off at your destination stop. The fare is subtracted from the money on your card.
ORCA cards are NOT usable on Seattle’s hop-on hop-off bus. It’s a private system. Along its 2 hour loop, it stops at 16 of Seattle’s top attractions including the iconic Space Needle, Pike Place Market,the Great Ferris wheel, Seattle Aquarium and Pioneer Square. You can choose 1- or 3-day pass, then board at any of the stops and get to know the city with on-board commentary from a professional tour conductor. 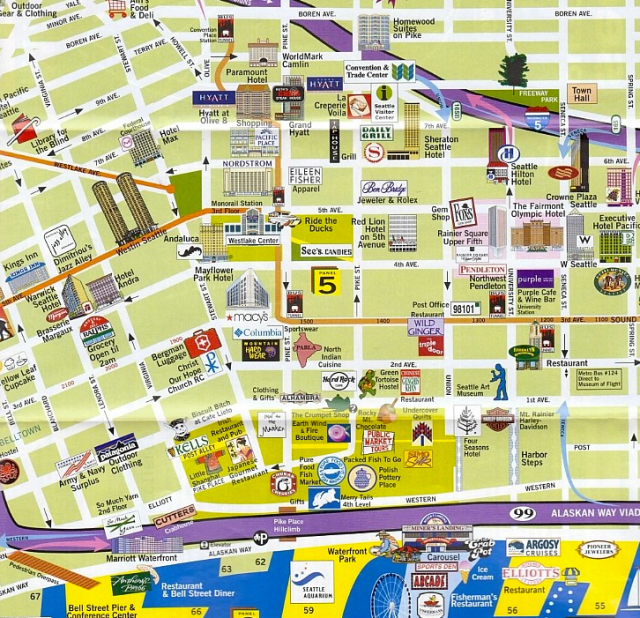 Of course, there is another way to explore the city… on foot, remembering that it’s very hilly and, when we were there, it was very hot! A good map is a good idea and good walking shoes are a must! I saw ladies trying to walk these streets in heels… not good. 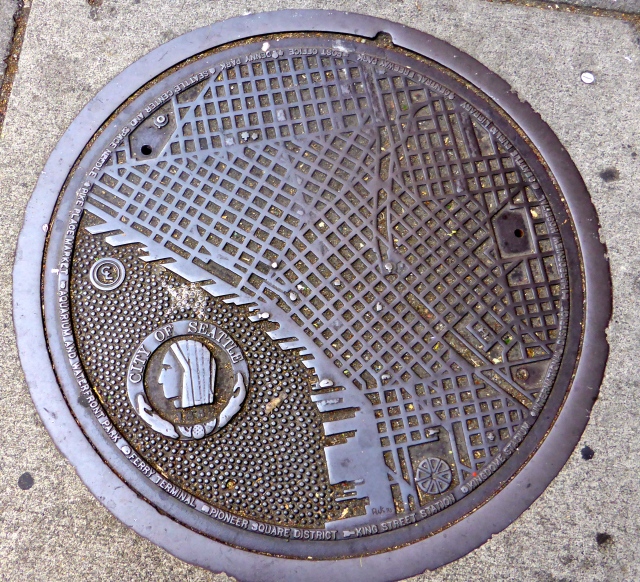 You tend to see so much more when walking. Manhole covers are often interesting. This one was rather helpful showing a map of the city and waterfront area.

One street has several foot plaques of famous Seattle-ites like Dale Chihuly. A visit to his glass exhibition was a must on our list of things to do.

And when you’re just too tired to walk any more, there are shady courtyards for a rest. Finding a good coffee spot was rather more difficult. There are lots of Starbucks coffee places of course… this was USA. But we don’t appreciate Starbuck’s coffee. After quite a lot of searching, we did find an excellent barista and whiled away a bit of time drinking good coffee and just watching the world go by. 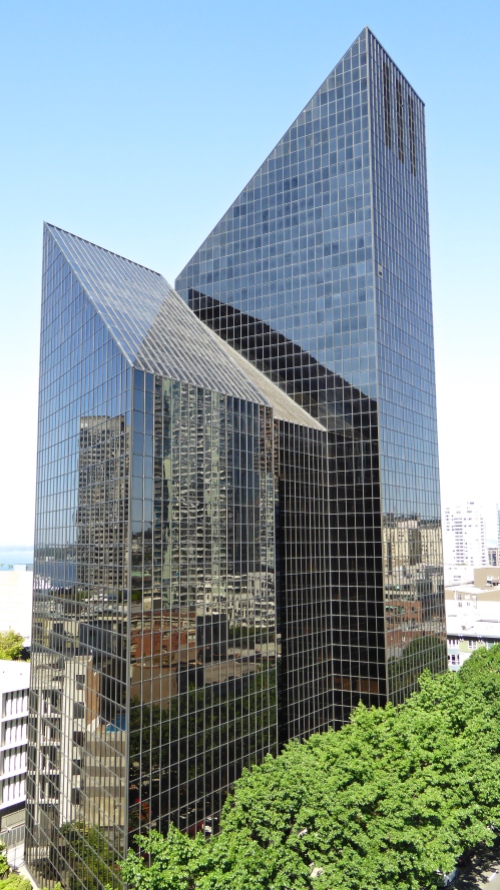 And then, when the heat and the hills finally defeated us, we wandered back to our hotel and looked at the view from the 21st or 39th floor…or something like that. High up.

This was July so the sun was rather loath to set… and the moon got up early. Electric lights began to appear on streets and in buildings. The city began to slow down… a little.

We checked emails and downloaded photos. Using any electrical appliance was absolutely no problem in our room. There was no lack of power points… almost a hundred I think David counted on the skirting boards alone.

At last the sun went down, the air cooled a little, and we turned in to get some sleep. We needed to be up early and ready for some more exploration of the city of Seattle.

More of that anon.