The third section of the delightful Conservatory Garden in the northern section of Central Park, Manhattan, was inspired by English gardens. Here you will find a beautiful selection of trees and herbaceous borders surrounding a central, secret, water lily pool.

Walking towards the “Secret Garden”

Concentric bands of paths give a maze like structure to this garden.

Greens predominate with a clever use of shape and texture.

The water lily pond in the centre of the garden.

This pond was dedicated in 1936 to the memory of Frances Hodgson Burnett, whose story of the “Secret Garden” has captured the hearts of so many, young and old. The story was originaly published in 1910 in serial format but was published as a book in 1911. It has become a classic of English children’s literature and over the years has been adapted to film and TV.

This garden, like the book upon which it is based, explores the healing power of gardens, and indeed, of all living things. There is also a powerful message here that being in a quiet place amongst living things can help to bring calm to the mind, to transform negative thoughts into positive thoughts, helping both psychological and physical well being. This is a garden that gives a much needed sense of tranquility in an otherwise very busy city.

The sculpture represents Mary and Dickon, the central characters of the book, who find healing of both mind and body in the secret garden they discover, a garden that had been locked away from everyone for many years. Mary holds a bowl of water for two little robins. It was a robin that lead Mary to find the secret garden. The robin had turned up some soil and it was there that Mary found the key to the garden. No key is required to enter this secret garden, just the desire to spend some time in the peace and quiet of a tranquil, beautiful space in a very big city. 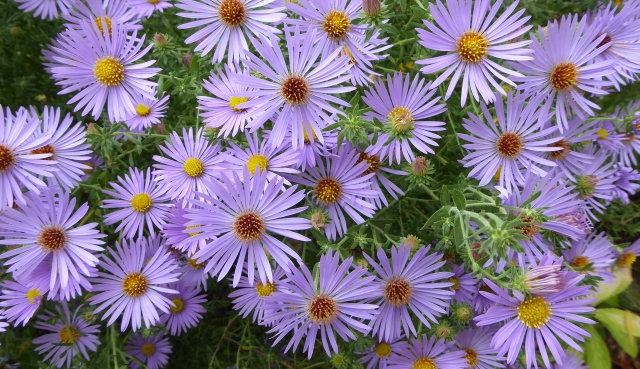 Simple flowers add just a touch of colour to this garden. 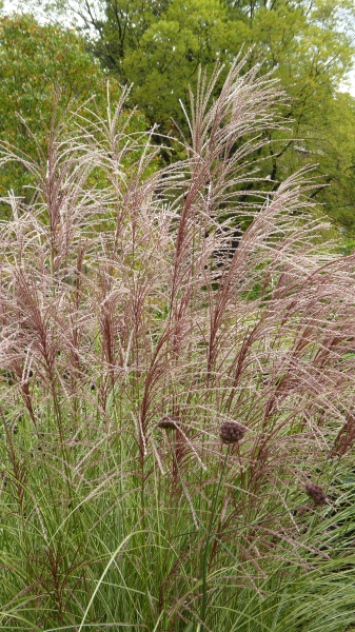 A closer look at some of the feathery grasses.

We could have stayed much longer but rain clouds threatened.

The northern end of Central Park.

We had to tear ourselves away from the beautiful and peaceful Conservatory Garden and head back towards the city before the rain came down. This part of Central Park is itself very attractive with undulating lawns, large rock faces and many trees, some of them not very old.

With the rain cloud becoming ever more threatening, we came out of the park onto the famous Museum Mile on Fifth Avenue and made our way to the fabulous Metropilitan Museum of Art. 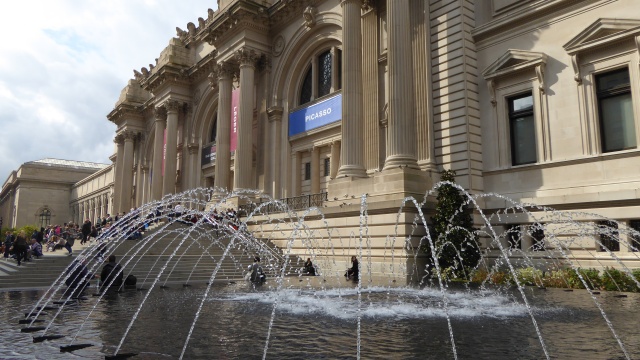 There we had lunch in the member’s lounge before spending the rest of the day being entranced by a wonderful exhibition called “Assyria” which transported us as far back as 11th century BC. You could spend many happy rainy afternoons exploring this art gallery with its changing exhibitions adding constant new attractions to the many, many permanent exhibitions.

Sun shining on one of the fountains at The Met.

By the time we emerged from The Met, the rain had passed and rays of sunshine were sparkling on one of the fountains in front of The Met. We made our way back to our friend’s apartment ready to relax our tired feet after what had been a truly enjoyable day in Manhattan.

And put our feet up we did as we watched barges move slowly down the East River towards Brooklyn in the late afternoon light. T’was a delightful way to unwind, again away from the chaos and hustle and bustle of New York. With a view like this to enjoy every day, I understand why our friends like to live in New York. We thank them for their wonderful hospitality… and the view.

other photos and stories of our journeys can be found on